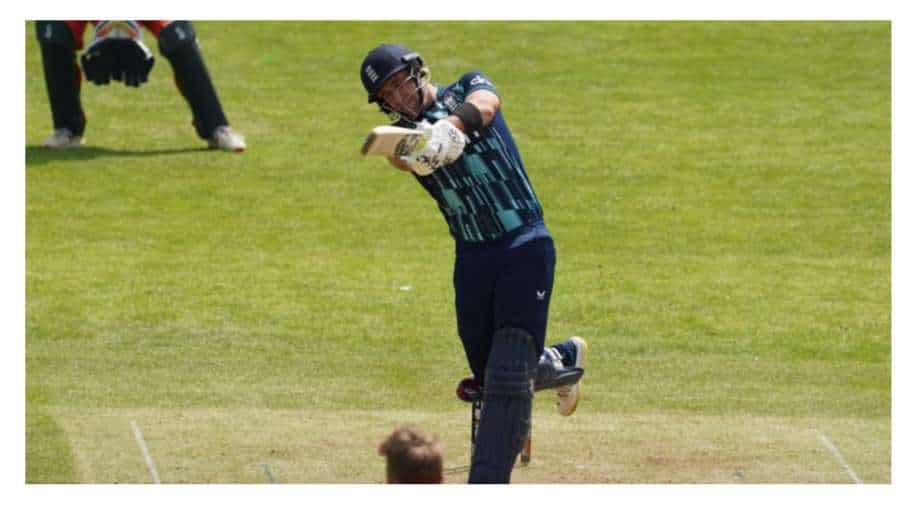 Liam Livingstone was at his attacking best as he went on to break a plethora of records during England's mammoth ODI total, 498 for 4, versus the Netherlands.

Being asked to bat first, Morgan-led Three Lions displayed their attacking style of cricket despite being 1-1 after Jason Roy's early dismissal. Phillip Salt, Dawid Malan and Jos Buttler were the three centurions as England reached a mammoth 498-4 in 50 overs, achieving the highest ODI total in history. Their innings was filled with as many as 26 sixes, most by any team in an ODI inning. Apart from the three centurions, big-hitter Liam Livingstone -- coming from an excellent IPL 2022 -- was also at his best as he slammed an unbeaten 22-ball 66, studded with 6 fours and an equal number of sixes at a strike rate of 300.

Courtesy his blistering knock, Livingstone broke a plethora of records. In the 46th over of the innings, the right-hander smacked Dutchman Philippe Boissevain for 32 runs -- including 4 sixes and two fours. This became the best over in ODI history for England as Livingstone went past Dimitri's Mascarenhas tally of 30 runs in 2007 off Yuvraj Singh's bowling at the Oval.

Further, Livingstone reached the 50-run mark in just 17 balls. In the process, the 28-year-old all-rounder registered the fastest half-century by an English batter in the history of the game. He went past his skipper Morgan's record, who had reached a fifty off just 21 deliveries in an ODI versus Australia at Trent Bridge in 2018. It was the same match when England had amassed 481/6, which is now the second-highest ODI total in men's cricket. In addition, Livingstone's fifty is the joint second-fastest in ODI cricket history alongside former Sri Lankan opener Sanath Jayasuriya, Martin Guptill, and Thisara Perera. He, however, missed overtaking AB de Villiers' all-time record by just one ball.

Meanwhile, keeper-batter and vice-captain Buttler also created history by reaching triple-figures in just 47-balls ton; registering the second-fastest hundred by an English batter in ODIs. Later, the 31-year-old got to the 150-run mark in 65 deliveries, becoming the second-fastest ever to reach the milestone in the format.