My heart wants to wrestle, whatever size I might be: World's first hijab-wearing pro wrestler Nor Diana to WION 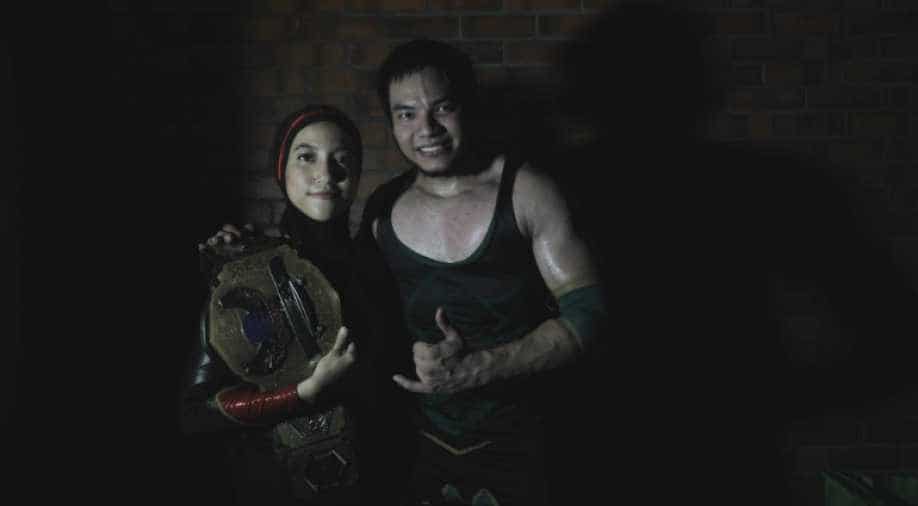 Nor Diana with her coach. (Image courtesy: Malaysia pro wrestling) Photograph:( Others )

Born on August 14 in Kuala Lumpiur, Malaysia, Nor "Phoenix" Diana cuts an unusual figure by taking on hefty male opponents inside a wrestling ring which is not an ordinary task to pull up in a Muslim dominated place.

At the tender age of 14, she fell in love with wrestling after playing wrestling video games with her brother. She then started watching WWE (World Wrestling Entertainment) and decided to pursue the sport.

After two months of training, Diana made her debut as a replacement for a wrestler who did not show up for the show. And since then, there has been no looking back.

She initially wore a mask while wrestling and finally unmasked herself in 2018, much to the surprise of the fans. As of now, Diana is the world's first hijabi pro wrestler in the world, and she is inspiring more from all around the world to follow in her footsteps.

In an interview to WION's Ayushi Agarwal, she opened up about her journey which did not come up that easy.

WION: Wrestling is all about muscled men, tall and athletic personality. How did you think that your 5:1ft frame could be a fit in a male-dominated sport?

Nor Diana: Why not? I have a passion, and I don't see any reason why I should not pursue it. My heart wants me to wrestle, and whatever size I might be, I do believe I can contribute in many different ways and forms to the pro wrestling industry to make up for the lack of the standard image.

Nor Diana: For two reasons. I am not comfortable with outsiders knowing my true self, so I use my persona instead; it's similar to how writers use their pen name, and celebrities change their names to a different public name. Secondly, I wasn't sure how the world would react if I showed my true self - a hijabi girl beneath the mask. I was nervous, even scared at times.

WION: How did you manage in breaking the stereotype in a Muslim majority nation where it is unthinkable and difficult to come up with women pursuing wrestling as their career?

Nor Diana: I believe that I have the courage to do what I love, despite what everyone says what I can or cannot. I decided not to get pulled down by anyone and appreciate everyone who supports me.

WION: What kind of reaction did you get pre and post your wrestling events?

Nor Diana: Often times I am laughed at and looked down upon for my size, stature, and gender - but it will always change to applaud and adoration once they see what I'm capable of doing in the ring.

WION: Do you also aim to go to the WWE?

Nor Diana: I aim to make professional wrestling as my full time work. WWE could be one destination, but there are also plenty of other options like NJPW and AEW. However, even if I get to constantly perform in independent shows around the world, I'd be the happiest I've ever been.

WION: Who is your favourite wrestler?

Nor Diana: Sasha Banks from WWE. She is the one who inspired me and kindled the desire in me to become a pro wrestler.

WION: Do you want Malaysia and other nations to come up with more barrier-breakers like you?

Nor Diana: Most definitely. Girls should be brave, and go for what they want, fight for what they believe in, and do what they are most passionate about. Then only they will find true happiness and a sense of achievement.

WION: Wrestling is your passion. What is the other job that you do?

Nor Diana: I am currently working as a clinical assistant at a private hospital.

WION: One message that you would like to give to all the women and nations who still discriminate between male and female sports?

Nor Diana: The message that I want to give everyone is to be patient and follow your dreams, no matter what they are. Don't let anyone decide what you are going to do. Just follow your dream, even if it is about wrestling.