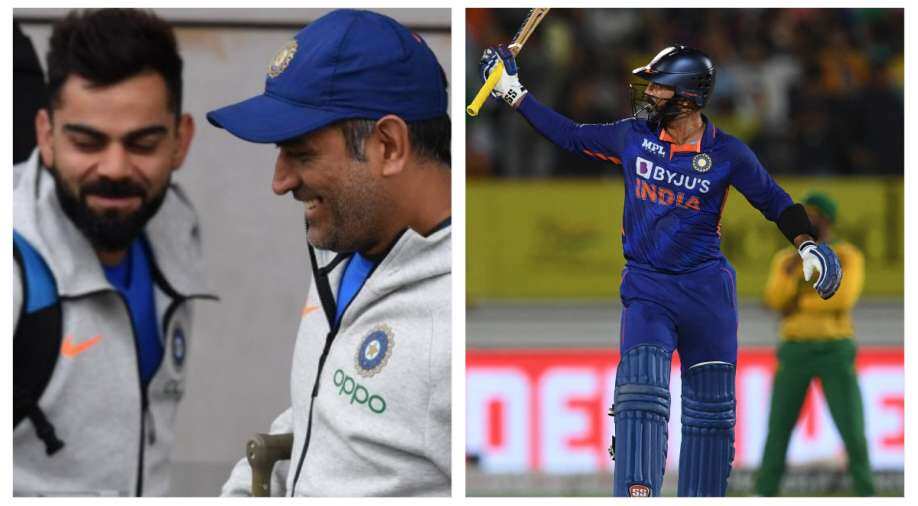 Comeback man Dinesh Karthik returned to the Team India setup after a three-year hiatus during the recently-concluded India-South Africa home T20Is. In the five-match series, DK performed well -- with a 21-ball 30 not out and 55 in the second and fourth match respectively -- to strengthen his case to feature in Rohit Sharma-led India's 2022 T20 World Cup squad.

After the end of the five-match series, which ended in a 2-2 scoreline after the series finale was abandoned due to rain in Bengaluru on Sunday (June 19), former Indian opener-turned-commentator Aakash Chopra picked DK as one of the star performers (along with Player-of-the-Series Bhuvneshwar Kumar and Ishan Kishan) for the host nation. He also lauded DK for his longevity, stating that he has even outlived MS Dhoni's career span.

"At No. 3, I have kept Karthik. Batting is very difficult at the number he bats. The way he has played, he has been brilliant. It has been a very long career (debuting in 2004), Dhoni's entire international career got over in between but DK is still there," Chopra said.

"The hunger is coming to the fore, the game plan, just the clarity about how he is going to play. He plays slightly in an unorthodox fashion but that is what is required to be done in the death overs. A specialist death batter is a very difficult role, there is no other role more difficult than this in the world," Chopra added.

For the majority of his career, DK was in the shadow of Dhoni, who excelled as India's finisher, astute captain, and wise keeper. After Dhoni's retirement, Rishabh Pant has broken into the scene, however, the swashbuckling left-hander hasn't been that successful in white-ball formats, so far, as compared to Tests. Hence, DK is still giving tough competition to the 24-year-old and is focused on representing India in the 2022 T20 WC, to be held Down Under.

The 37-year-old Karthik will now shift his focus to the two-match T20I series between India and Ireland, in Dublin, on June 26 and 28.