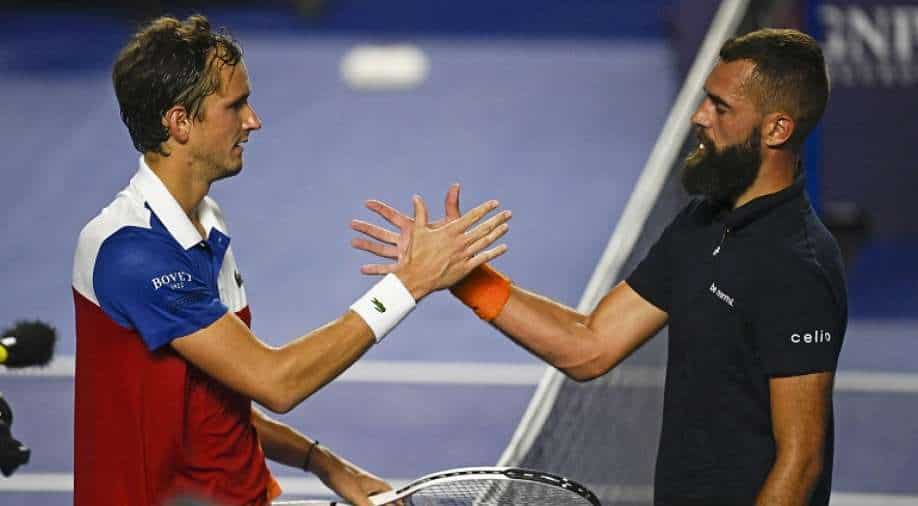 Russia's Daniil Medvedev defeated Benoit Paire of France 6-3 6-4 in the first round of the Abierto Mexicano tournament in Acapulco.

Russia's Daniil Medvedev defeated Benoit Paire of France 6-3 6-4 in the first round of the Abierto Mexicano tournament in Acapulco on Tuesday to get his quest for the world number one ranking off to a winning start.

World number two Medvedev is looking to ascend to the top ranking for the first time by displacing Serbian Novak Djokovic, who is competing at the Dubai Tennis Championships.

Djokovic will be forced to relinquish the crown even if he wins Dubai for a sixth time, provided the Russian wins the ATP 500 event in Acapulco, where he is making his tournament debut.

"If Novak would not be playing, then maybe it would be a little bit more in my mind because it would only be me and it depends on what I can do," Medvedev said.

Taking to the main showcourt after Medvedev's win, Rafa Nadal breezed past 100th-ranked American Denis Kudla 6-3 6-2 in his first match since winning the Australian Open last month for his 21st Grand Slam title.

The 35-year-old Spaniard seemed to have some problems with the humidity on a warm night in the coastal resort town and decided to save as much energy as he could, sealing the contest in 76 minutes with his 16th forehand winner and 26th overall.

Nadal lost just four points on his serve while breaking his opponent three times to race to his 11th consecutive win in the 2022 season.

"It has been a positive start, a good victory in straight sets. That's always very positive for the confidence," Nadal said. "I think I played a very solid match, a good effort today."

Medvedev's contest also appeared to be a one-sided affair when Paire dumped a lifeless forehand into the net to hand the Russian the first set in 51 minutes. But Paire flexed his muscle in the second, attacking the Russian's serve for a 4-2 lead.

Playing for the first time since his defeat to Nadal in the Australian Open final, Medvedev kept his focus and outworked the Frenchman in a back-and-forth deuce game to level at 4-4 and sealed the win when Paire's backhand sailed into the net.

"It's always not easy to come back after some rest and some time off competition," Medvedev said. "Sometimes better, sometimes worse.

"I felt like my sensations were not at the top today, but I managed to fight until the end against a very tough opponent and I'm happy that I managed to win."

Fourth-ranked Serbian Stefanos Tsitsipas was made to work hard by Serbia's 51st-ranked Laslo Djere before the Greek registered a 7-6(7) 7-6(4) win in two hours and 13 minutes.

But Italian world number six Matteo Berrettini bowed out, retiring with an injury against American Tommy Paul. The Wimbledon finalist won the first set 6-4 but quit while trailing 1-5 in the second.

Australian John Millman was also forced to retire against American Marcus Giron when he suffered a freak injury by hitting the tennis ball into his own eye.