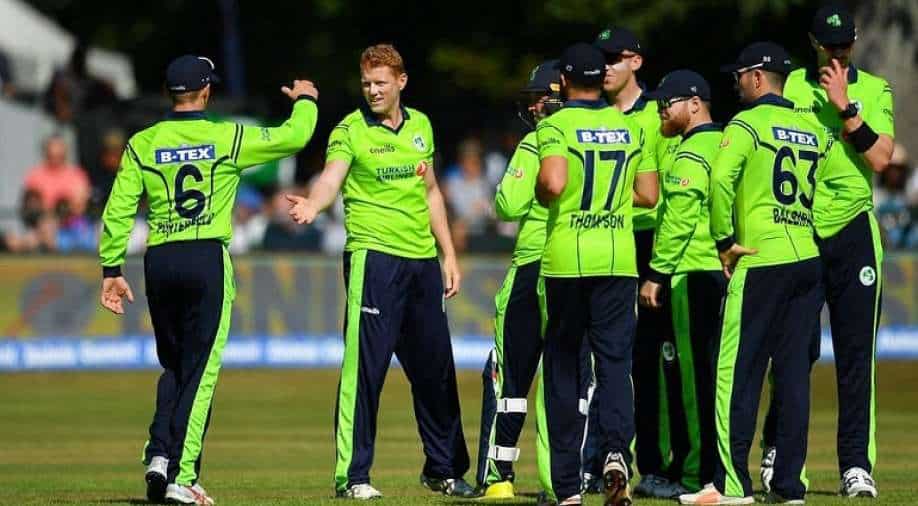 UAE stopped the three-match winning run of Nepal with a 68-run victory while Ireland beat Oman by 56 runs.

At the Oman Academy ground 1, UAE exhibited a clinical performance to reach the ICC Men's T20 World Cup for the second time.

The two winning teams took the 13th and 14th spots for the tournament in Australia later this year, with the last two places to be decided at the Qualifier B in July.

Chasing an imposing victory target of 176 to win, Nepal was rocked by the early strikes of UAE pacer Junaid Siddique.

The quick, was in top gear, removing the top-three Nepal batters in his three-over spell. A sensational opening over saw Siddique sending back opener Aasif Sheikh and one-down batter Lokesh Bam off two successive balls.

Nepal was 3-2 in six balls and the chase looked a tall order. Batting first after losing the toss, Ireland posted a total of 165/7. Gareth Delany top-scored with a masterfully constructed 32-ball 47.

Oman began the Powerplay well as Ireland's usually reliable opening pair - Paul Stirling and Andrew Balbirnie - failed them this time. However, Delany and Harry Tector erected an 82-run fourth-wicket stand to put the pressure back on the hosts.

Tector was the aggressor early on, but once Delany settled in, fireworks ensued on both ends of the wicket. Skipper Zeeshan Maqsood in particular endured a difficult afternoon with the ball as Delany devoured his only over, smashing three consecutive sixes.

Bilal Khan had dismissed both the openers earlier and Kaleemullah matched his strike partner's efforts by plotting Tector's demise for a well-made 35.

ALSO READ: Not naming for family's sake, but will not hold back if it's repeated: Wriddhiman Saha warns journalist

Lorcan Tucker followed suit in the very next ball, and with Khawar Ali sending Delany back in the following over, Oman had their tails up for the final stretch of the innings. With good reason too, as Ireland was placed precariously at 106/5 at the end of 14 overs.

George Dockrell chipped in with a valuable 16-ball 18, but it was Andy Mcbrine that provided the fuel to take Ireland past 150. His quick-fire 36 included 3 fours and 2 sixes.

Bilal was Oman's star performer with the ball, ending the day with figures of 3/23. In response, Oman was bowled out for 109 in 18.3 overs. Shoaib Khan was the top scorer with 30.

Oman matched Ireland's efforts in the batting Powerplay, losing both their openers cheaply. Shoaib Khan and Zeeshan Maqsood (28) steadied the ship with a 40-run partnership.

Shoaib scored at a healthy pace to keep the asking rate in check. They dealt with the Irish spinners pro-actively, effusing shades of Ireland's game-changing fourth-wicket partnership earlier in the day.

But once Josh Little scalped Shoaib's wicket in the 11th over, Oman's batting roster crumbled. Khurram Nawaz was dismissed in the same over. Khawar Ali and Naseem Khushi soon followed suit.

Receiving no support from the other end, Maqsood was tasked with winning the match all by himself. His wicket in the 15th over put an end to all hopes of a successful Omani run-chase.

ALSO READ: Whoever you are, you're talking like a kidnapper: Aakash Chopra to journalist who threatened Wriddhiman Saha

Ireland cleaned up over the next four overs and put the finishing touches on a well-deserved victory.

Simi Singh was their top performer with the ball, recording figures of 3/20 in 3.3 overs, but all the bowlers chipped in. Josh Little, Craig Young, and Andy Mcbrine claimed two wickets apiece.