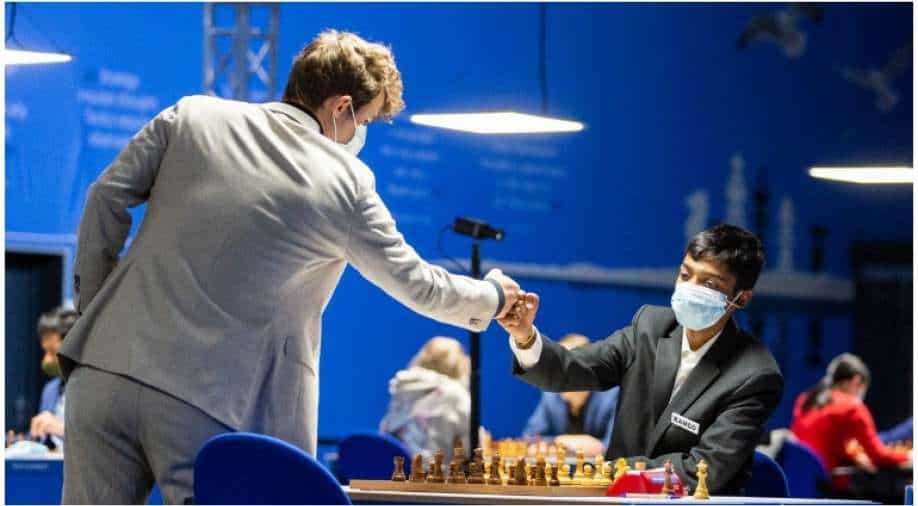 With back-to-back tournaments and late-night online matches keeping him busy, the young Grandmaster from Chennai doesn't have the time to savour his big win, but he sure does enjoy the process. WION had an opportunity to speak to him and understand how he feels after defeating Magnus Carlsen:

16-year-old Chess prodigy from India, R. Praggnanandhaa is extremely happy and grateful to his coach for eight years, Grand Master Ramesh and Chess legend Viswanathan Anand, who has been offering mentorship via video lessons. During the wee hours of Monday(Indian time), the young man from India had defeated World No.1 Magnus Carlsen and scaled a new high in his already celebrated career. With back-to-back tournaments and late-night online matches keeping him busy, the young Grandmaster from Chennai doesn't have the time to savour his big win, but he sure does enjoy the process. WION had an opportunity to speak to him and understand how he feels.

"I worked very hard for this event.. I also tried to manage my sleep schedule by staying awake till 3am, over the last 10 days, in order to prepare myself and adjust to the routine.(The online games as part of the Airthings Masters begin around 10pm India time and go on until 4am)… This is a very important tournament for me" he said.

Referring to having lost three of four matches on his first day, he said that he had played "not-so-good". However, that didn’t deter the lad from fighting with more vigour on day two, when had to take many top-ranked players. "Day 2 was when I faced World No.1 Magnus Carlsen… I was very excited to fight against the top players and tried to forget about the results of the first day.. I was very happy to win against the World Champion and it gives me huge confidence and a boost" he added.

Profusely thanking their efforts, Praggnanandhaa acknowledged the efforts of Grandmaster RB Ramesh, for guiding him since 2014 and helping in all the games and tournaments. He also shared special thanks for five-time World Chess champion, Viswanathan Anand, who had been offering support via the Westbridge Anand Academy.

Having bagged a win that is being talked about world-over, the teenager isn't even taking time out, to celebrate and look back. "I'm happy about the win.. But, didn’t celebrate it because I really wanted to focus on the tournament, which is still going on…" The clearly-visible dark circles around his eyes are testimony to the hard work and efforts that the young man has been putting in. This includes staying up during the wee hours and peering into the computer screen for over four hours, with laser-sharp focus on the cerebral game.

While the ongoing online tournament scheduled to come to a close by a weekend, Praggnanandhaa can't think of resting and living the life of a normal teenager. By February 27th, he's headed for Italy for the next tournament.