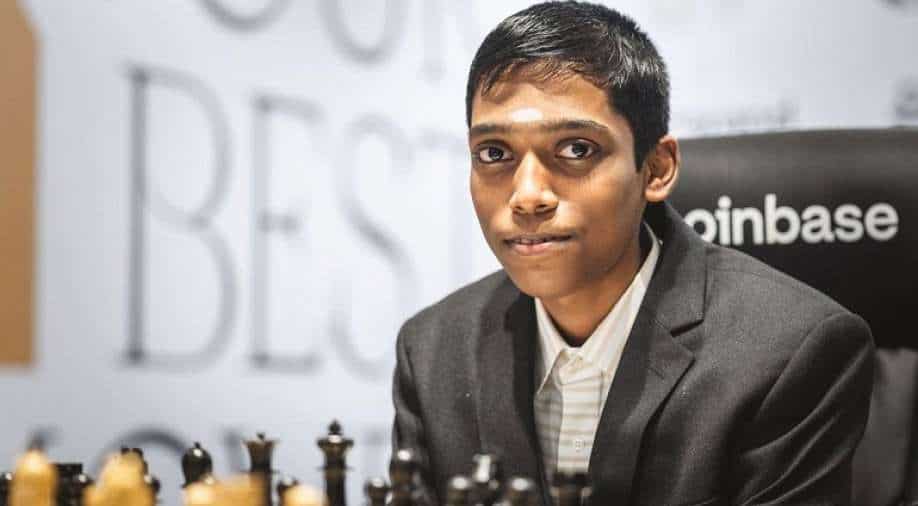 Secretary of All India Chess Federation (AICF) Bharat Singh Chauhan is not surprised at Praggnanandhaa's stunning world champion Magnus Carlsen in the ongoing Airthings Masters and says the young Indian player has been consistently performing well in various international events.

Secretary of All India Chess Federation (AICF) Bharat Singh Chauhan is not surprised at 16-year-old R Praggnanandhaa's stunning world champion Magnus Carlsen in the eighth round of the ongoing Airthings Masters and says the young Indian player has been consistently performing well in various international events.

"I am not surprised at the way he is playing in various international events and the way he is performing. I expect more fireworks from these youngsters Praggnanandhaa, Nihal Sarin, Gukesh, Erigaisi Arjun. All of them have done well. Praggnanandhaa has defeated Carlsen which is a wonderful feeling."

"Praggnanandhaa puts his best in all the games 39 moves or 89 moves. He keeps fighting till the end. He is very well-versed with the theory and very dynamic. Good at tactics also, so I think it was a wonderful game," Chauhan said.

After beating the World Champion Praggnanandhaa came back with two more victories showing that his win was not a flash in the pan.

The 16-year-old registered victories against Andrey Esipenko and Alexandra Kosteniuk in rounds 10 and 12 of the Airthings Masters, an online rapid Chess competition.

ALSO READ: India had to make Rohit the skipper across formats after Kohli's resignation as Test captain: Saba Karim

"It is expected from him. He is doing well and he can defeat any player in the world. No top player can take him lightly. He is a great player and I am sure with the great mindset, great opening preparations and tactical play, he is really wonderful. I see a big future in him," Chauhan said.

Praggnanandhaa's win over Carlsen was a kind of sweet revenge as the Norwegian dethroned Indian legend Viswanathan Anand as World Chess Champion in 2013. So far only three Indians have managed to beat Carlsen.

Before Praggnanandhaa, P Harikrishna and Viswanathan Anand have beaten the Norwegian.

"It is just one game and Anand is still strong. He can beat Magnus even today or any player in the world. Anand is Anand. So, youngsters will take revenge (for) which our yesteryears champions are having minus scores against him. These youngsters will bring glory to the country," Chauhan said.