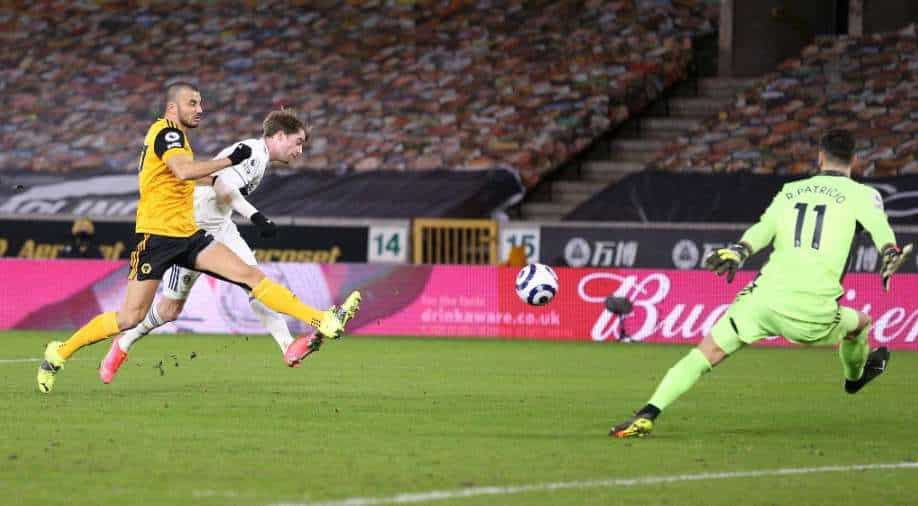 Wolves made it three wins in four Premier League matches as an own goal from Leeds keeper Illan Meslier handed the hosts a 1-0 victory on Friday.

Wolves made it three wins in four Premier League matches as an own goal from Leeds keeper Illan Meslier handed the hosts a 1-0 victory on Friday.

Nuno Espirito Santo's side took the points in the second half at Molineux when Adama Traore's shot hit the bar and bounced into the net off Meslier.

Leeds pushed hard for an equaliser but Mateusz Klich hit a post and Patrick Bamford had a goal ruled out for offside.

Wolves moved above Leeds into 11th place after extending their recent upturn in form, while Leeds have lost three of their last four league games.

"Players like Adama, when they have the ball and start running, are really dangerous. It was a beautiful strike," Nuno said. "It is a hard moment for their keeper.

"We still have some issues to assess but the approach that we have during these tough moments, always believing, always committing.

"You can't say anything about the attitude of the players. We chase the high standards we have and let's keep on doing that."

The tone for an entertaining encounter was set when Raphinha slipped in Klich and the midfielder's low effort ricocheted off the near post.

Meslier needed to be alert to deny Semedo again just before the break.

Wolves forward Pedro Neto seized on Jack Harrison's loose pass to fire over early in the second half.

Raphinha's whipped delivery was met by Liam Cooper and his header was parried by Patricio, with Bamford's follow up smuggled away.

That save proved crucial as Wolves instantly regrouped to snatch their fortuitous 64th minute winner.

Traore collected the ball on the left and shrug off Luke Ayling as he surged towards the Leeds area.

The winger's 25-yard drive rattled the underside of the bar and the ball bounced out, hit Meslier on the back and rolled across the line.

Patricio saved from Cooper as Leeds sought a quick response and Bamford had an emphatic finish ruled out for offside.

Yet a leveller never came thanks to two smart stoppage-time saves from Patricio, who denied Helder Costa and turned away Raphinha's header.