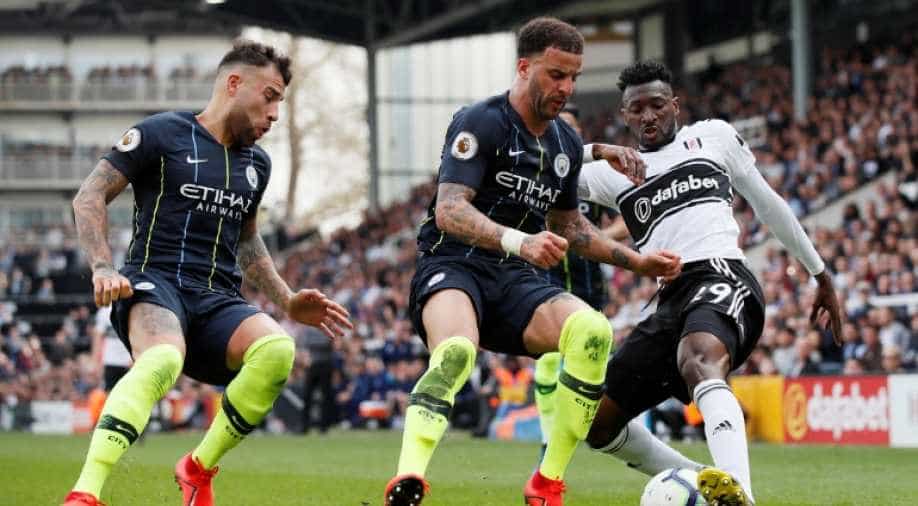 Top-class goals from Bernardo Silva and Sergio Aguero took Manchester City back to the top of the Premier League in a 2-0 win over Fulham at Craven Cottage on Saturday.

A wayward ball from Fulham's Timothy Fosu-Mensah gifted the visitors the lead in the fifth minute.

Sergio Aguero intercepted the Dutchman's pass just outside the area and passed to Silva, who cut across past two defenders and drove his left-footed shot into the corner past the diving Sergio Rico in goal.

City manager Pep Guardiola told reporters that Silva was playing so well he had made himself a fixture in the lineup.

"The way he is playing, I cannot do anything else but put him on the pitch," he said.

Fulham, who were missing top scorer Aleksandar Mitrovic after the international break, kept five men in the back line in a bid to keep City's attack at bay, leading to one-way traffic. In the end, the Cottagers were unable to register a single shot on target all game.

The home side's captain Tom Cairney won a freekick on the corner of the box in a rare break forward in the first half that had the home fans clapping and stamping their feet to rattle the century-old Johnny Haynes Stand.

However, Joe Bryan's cross was a whisker too high for Ryan Babel to head cleanly, and the ball went wide.

City's Silva turned provider in the 27th minute, pouncing onto a loose ball and passing to Aguero, who sprang forward past three defenders and shot from a tight angle up into the opposite corner for his league-leading 19th goal of the season.

Caretaker manager Scott Parker's Fulham have now failed to record a win in 14 games against City in all competitions and have lost the last eight in a row.

The result takes City back to the top of the Premier League on 77 points, one ahead of Liverpool who host Tottenham Hotspur on Sunday.

"Now it's the last part of the season, seven games left. It's easy: Every game we play we have to win if we want to be champions," Guardiola said.

For Fulham, the outlook is bleak. They remain in 19th place on 17 points, and will now most likely need to win every one of their remaining six matches to have a chance of avoiding relegation.

"We understand the predicament. The main focus now is we push and we end the season on a positive after a difficult campaign," Fulham boss Parker told reporters.

"We have another game on Tuesday and we have to do better. We have six games left and mathematically we're still in it," defender Cyrus Christie said.