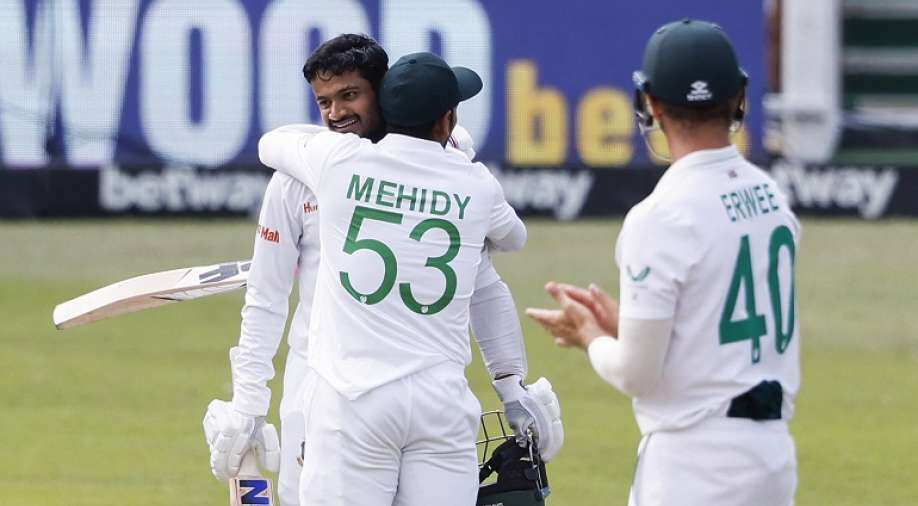 Mahmudul struck a patient 137 from 326 balls and was the last man out as Bangladesh posted 298 in their first innings. South Africa have a 75-run lead after they went to the close for six without loss.

Mahmudul Hasan Joy made his maiden test century - and the highest score for Bangladesh by almost a hundred runs - against South Africa on Saturday, as he launched a fightback for the tourists on day three of the first Test at Kingsmead.

Mahmudul struck a patient 137 from 326 balls and was the last man out as Bangladesh posted 298 in their first innings.

South Africa have a 75-run lead after they went to the close for six without loss in their second turn to bat before bad light brought a premature end to the day.

Home openers Sarel Erwee and Dean Elgar will hope to score quick runs on the fourth morning to put South Africa in a position to declare and then aim to bowl the visitors out again. Both are three not out.

Bangladesh had begun the day on 98 for four and quickly lost nightwatchman Taskin Ahmed (1) as he became the first test wicket on debut for home seamer Lizaad Williams (3-54), caught at the second attempt at slip by Wiaan Mulder.

But Mahmudul and Litton Das (41) put on 82 for the sixth wicket as South Africa missed chances in the field, before the latter was bowled by Williams.

Mehidy Hasan Miraz (29) was involved in another partnership of 51 for the eighth wicket as the visitors frustrated their hosts, but the innings was ended when Mahmudul edged the impressive Williams to Simon Harmer at slip as he tried to up the scoring rate.

Off-spinner Harmer (4-103) was the most successful home bowler in his first test in seven years as South Africa were forced to make a number of changes to their regular side due to having five players away in the Indian Premier League and fast bowler Anrich Nortje injured.

The second and final test will be played at St George’s Park in Gqeberha from Thursday.