Lionel Messi to Robert Lewandowski: A look at players with most goals in a calendar year since 2017 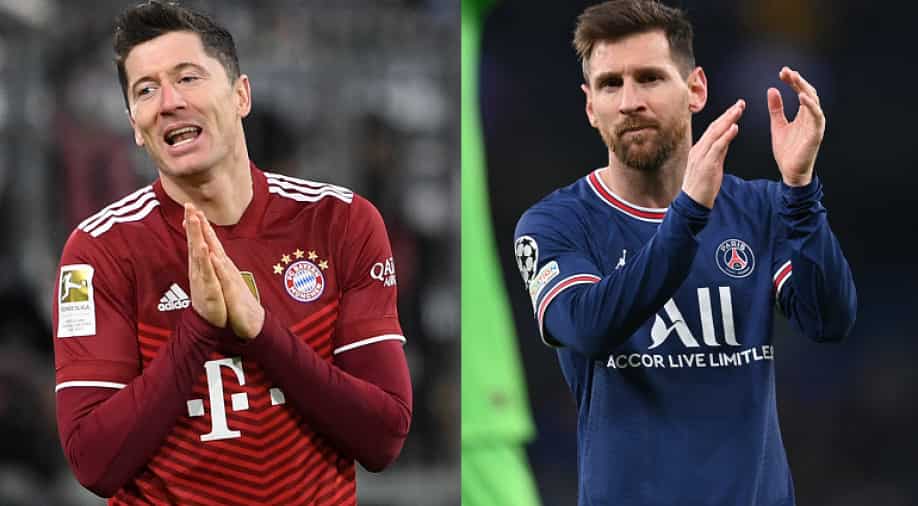 Robert Lewandowski and Lionel Messi feature in the top goal-scorers of the calendar year since 2017. Photograph:( AFP )

Bayern Munich striker Robert Lewandowski was the top scorer of the calendar year in 2021 with a stunning 69 goals from 59 matches. The Polish forward has been a prolific goal-scorer for his national team and the Bundesliga giants over the years but has taken his game to a whole new level in the past few years.

Lewandowski has been ruling the Bundesliga goalscoring charts for the last few years and has been an unstoppable force for Bayern. He might have missed out on winning his maiden Ballon d'Or in 2021 but Lewandowski broke several records with his goal-scoring exploits throughout the year as he finished as the top-scorer of 2021.

Here we take a look at the top goal-scorers in a calendar year since 2017:

England and Tottenham Hotspur striker Harry Kane had his best campaign in the year 2017 when he scored a whopping 56 goals in 52 games for club and country. Kane became the first player to outscore both Lionel Messi and Cristiano Ronaldo that year with his sensational run. He won the Premier League Golden Boot for the 2016-17 season and also broke Alan Shearer's record for most Premier League goals in a calendar year.

Lionel Messi, who holds the record for most goals in a calendar year by any footballer with a staggering 91 goals in the year 2012, had topped the goal-scoring charts in the 2018 season. One of the best footballers of all time, the Argentine icon scored 51 goals in 54 matches in the year 2018. It was the eighth time in nine years that Messi scored 50 or more goals in a calendar year, extending his dominance in world football.

Robert Lewandowski had a phenomenal season with Bayern Munich to end 2019 with the most goals in a calendar year for his club and national team combined. The Polish striker bagged an impressive 54 goals in 58 games leaving the likes of Messi and Ronaldo behind to emerge as the top-scorer of the year. His brilliant run helped Bayern Munich claim the Bundesliga title and clinch the treble.

Robert Lewandowski continued his magnificent goal-scoring form in the year 2020 as he once again emerged as the top scorer in the calendar year with 47 goals from 44 games for his club and the national team across all competitions. Lewandowski played an instrumental role in helping Bayern win the Champions League in 2020 and missed out on a deserved maiden Ballon d'Or as the awards were scrapped due to COVID-19.

Robert Lewandowski's dream run continued in the year 2021 as he once again remained unstoppable for Bayern Munich in the Bundesliga and the Champions League. The Polish striker took his performances a notch higher with a whopping 69 goals in just 59 games. He broke German legend Gerd Muller's record for most goals in a single Bundesliga season with 41 goals in just 29 league games. For Poland, he struck 11 times in 12 matches to finish the year with most goals by any player across the globe.