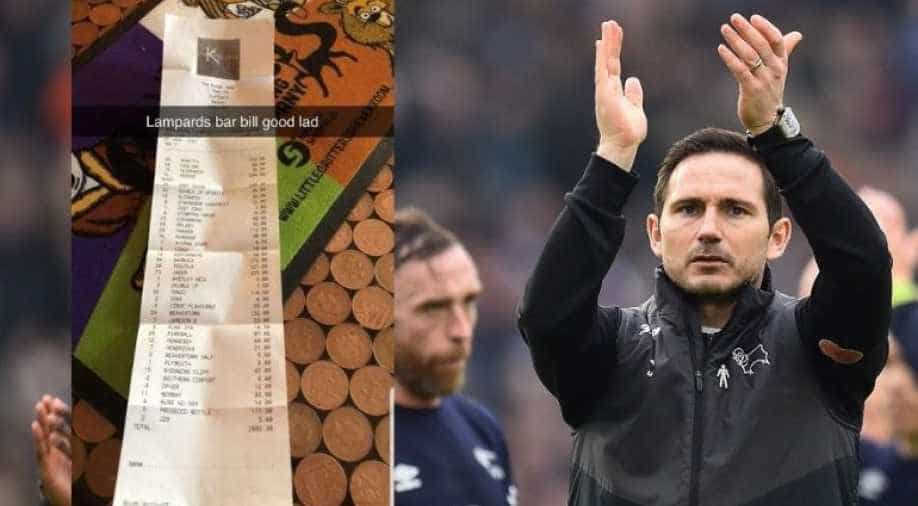 Although, it is not clear that who actually paid the bill!

Derby County defeated Leeds United 4-2 on Wednesday to complete a 4-3 aggregate comeback win and reach the English Championship play-off final. The dramatic revival was set by Jack Marriott, who scored twice for the team.

More than win, the post-match celebration got highlighted when the Derby County's travelling fans celebrated the win at The Kings Head pub and a picture was shared online showing a bill for around $3,567 (£2,800 to be exact) at the same venue.

The photo of the bill shared with a caption, "Lampard's bar bill good lad."

Although, it is not clear that who actually paid the bill.

There were people who tried to remain sober as a diet coke and two cokes were also ordered.

Frank Lampard’s Bar Bill last night after beating Leeds to claim a place in The Championship Play off final👏🏻👏🏻👏🏻 pic.twitter.com/e0QhDtz7S3

Former Chelsea and England midfielder Frank Lampard is now one game away from taking the Rams back into the lucrative Premier League in his first season as a manager, with Aston Villa their opponents at Wembley on May 27.

Leeds, already 1-0 up from the first leg, scored first in front of their own fans at Elland Road on Wednesday.

But Marriott's first goal seconds before half-time got the Rams back into contention and he settled a match which ended with both sides down to 10 men by scoring again five minutes from full-time.

"Everyone wrote us off"

Derby's victory was all the more impressive given Lampard's sixth-placed side had only just scraped into the playoffs.