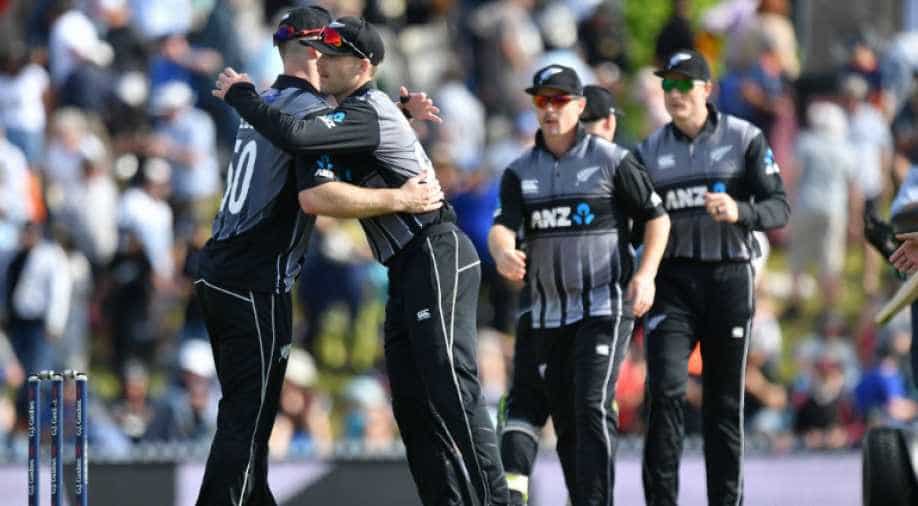 In reply to New Zealand's 180, England were well placed at 139 for two in the 15th over before a flurry of wickets reduced them to 166 for seven at the close.

A dramatic England collapse which saw five wickets fall for only 10 runs allowed New Zealand to snatch a 14-run victory in their Twenty20 international in Nelson Tuesday.

It also put New Zealand 2-1 ahead in the series with two games to play.

England were on track to overhaul New Zealand's 180 when they reached 139 for two in the 15th over, with captain Eoin Morgan in full flight as he cracked sixes off consecutive Mitchell Santner deliveries.

But with England needing 42 off the remaining 31 deliveries Santner turned the match when he had Morgan caught by Colin Munro off the final ball of the over.

Dawid Malan (55) and James Vince (49) had laid a solid foundation for England at the top of the innings.

But Morgan's dismissal started a collapse which saw Munro run out Sam Billings for one in the following over before Blair Tickner removed Vince.

In the space of two deliveries, Lockie Ferguson bowled Lewis Gregory without scoring and had Sam Curran caught for two leaving Tom Curran and Saqib Mahmood to struggle through to the end.

"That's one that got away," England captain Morgan said, pointing to the lack of experience in his squad.

"We were in control for the whole chase until we were three or four down, probably that's a lack of experience. The guys need to get more games into them at this level."

Ferguson and Tickner both finished with two for 25 while spinner Santner and Ish Sodhi took a wicket apiece.

"It could have gone either way at the halfway mark. But we knew if we could keep taking wickets it would be touch for them," New Zealand captain Tim Southee said.

A sound middle-order partnership by Colin de Grandhomme and Ross Taylor laid the basis for New Zealand after Martin Guptill had given them a flying start with 33 off 17 deliveries.

Man-of-the-match de Grandhomme smacked 55 off 35 while Taylor produced a more sedate 27 from 24 in a 66-run stand after New Zealand were three down in the eighth over.

It was a better performance by England in the field with a much-improved catching effort which accounted for four of the seven wickets. But the bowling discipline dropped as New Zealand benefited from eight wides and two no balls.