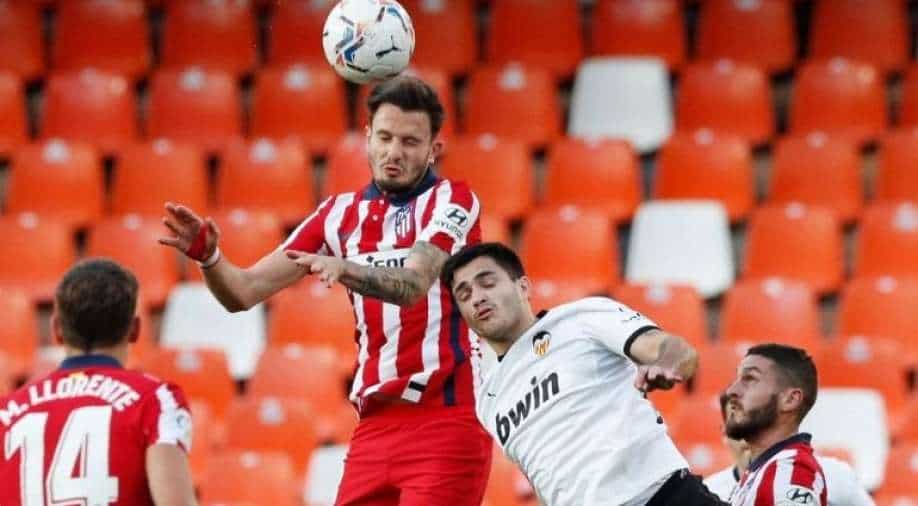 Also on Saturday, Sevilla left it late to beat struggling Huesca 1-0 and notch a fifth consecutive victory in all competitions.

Atletico Madrid were rewarded for their determination when they snatched a 1-0 win at Valencia thanks to a late own goal to go level on points with La Liga leaders Real Sociedad on Saturday.

The visitors had carved out many chances with no reward until Yannick Carrasco cut into the box and his cross bounced off the flailing leg of Valencia defender Toni Lato and trickled into the net in the 79th minute.

The own goal was fortuitous but certainly deserved after Diego Simeone's side had dominated possession and fired 14 shots at goal, denied by Valencia's in-form keeper Jaume Domenech and a goal-line clearance by defender Daniel Wass.

It gave second-placed Atletico a sixth consecutive La Liga victory, having beaten Barcelona 1-0 last week to secure their first league success over the Catalans in a decade.

Atleti move on to 23 points after nine games, level with leaders Sociedad who have played 10 and are in action on Sunday at home to Villarreal.

"Their best player was their goalkeeper which says a lot about what happened in the game," said Atletico coach Simeone, who was visibly emotional during the minute's silence before the game in tribute to his old friend Diego Maradona.

"We felt very good today, we played in their half for long periods and got very close to scoring before we did. Winning in Valencia is not easy at all."

Also on Saturday, Sevilla left it late to beat struggling Huesca 1-0 and notch a fifth consecutive victory in all competitions.

Moroccan forward Youssef En-Nesyri struck the only goal in the 83rd minute, appearing at the near post to knock in a cross by Lucas Ocampos, whose dribble out to the right wing had drawn three opposing players away from his team mate.

Sevilla, who have now won their last three league games after losing their previous three, climbed into fifth in the standings on 16 points.

Huesca are 19th and still without a win in 11 matches since returning to the top flight.