Here's why Mercedes are painted different for German Grand Prix 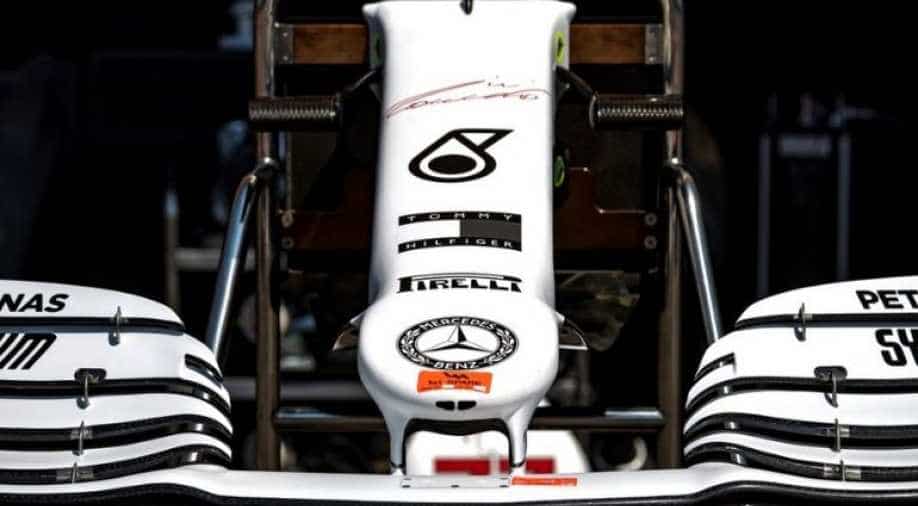 A picture taken on July 25, 2019 shows the front wing of the car of Mercedes' British driver Lewis Hamilton ahead of the German Formula One Grand Prix, Photograph:( AFP )

Lewis Hamilton's Mercedes team revealed a special "retro" half-white livery for their cars being used to celebrate 125 years of motorsport at this weekend's German Grand Prix.

The cars to be raced by five-time world champion Hamilton and his team-mate Valtteri Bottas feature both white paintwork and silver, merging both in a "commemorative livery" for the event, which is sponsored by the team's parent company.

Sunday's race will also mark the team's 200th start as a manufacturer entrant in the world championship.

The front end of the W10 cars has been re-worked as a tribute to Mercedes' original colours and includes not only the white paintwork but also red numbers and old-fashioned logos.

The rear remains predominantly silver, the colour for which the team became famous as the 'silver arrows'.

Team boss Toto Wolff said, "The world's first car race was held from Paris to Rouen in 1894 and the winning machine had at its heart an engine manufactured to the design of Gottlieb Daimler.

A special celebration deserves a special look... ❤ This is the story behind our #GermanGP livery! 👇 #Motorsport125 pic.twitter.com/Yt0st2Otd2

"It was the start of a great motorsport tradition that continues to this day and we are incredibly proud to write the next chapter in this legacy."

His modern Mercedes team dominate Formula One and lead the constructors championship with 164 points ahead of Ferrari while Hamilton is 39 ahead of Bottas in the drivers title race.

According to Mercedes, the team started with white paintwork on their cars, but it had to be removed during a race meeting in 1943, to help the cars save weight.

In an official explanation, the team said the W25 car entered for the Eifelrennen at the Nurburgring held on June 3 was found to be over the weight limit of 750 kg.

"Allegedly, the team was able to bring the weight down to within regulatory limits by scraping off its white paint," said Mercedes.

"Without the white paint, the metal bodywork of the car was exposed, giving it a silver look: the first Silver Arrow was born."