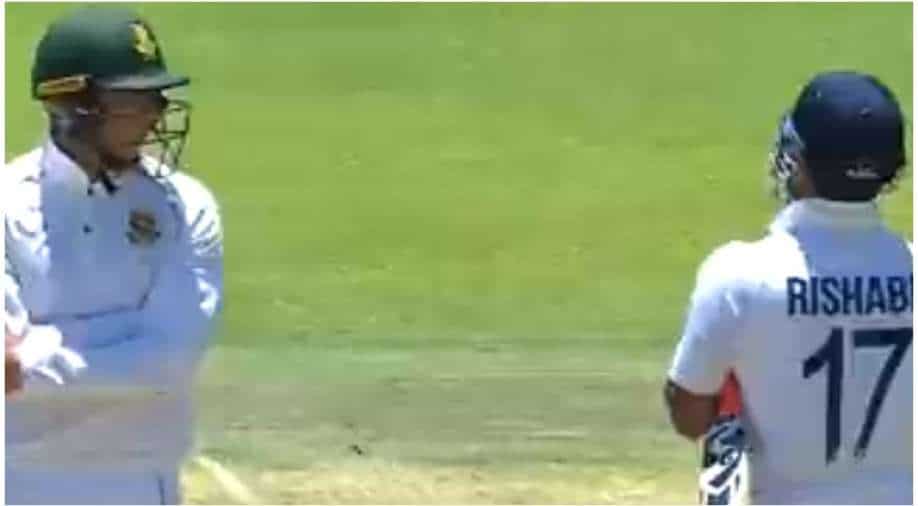 The chat between Rassie van der Dussen and Rishabh Pant was caught on stump mic where the latter told the South African, "If you have half knowledge, then keep your mouth shut."

Day 3 of the second and penultimate Test between India and South Africa has been a pulsating affair at The Wanderers, Johannesburg. The day's play started with Indian batters Cheteshwar Pujara and Ajinkya Rahane in the middle, trying to stretch India's lead, back then at 58 (being 85-2), versus the Proteas.

Both Pujara and Rahane started off on a positive note and added runs at will. After both the senior pros fell after reaching their respective half-centuries, the onus fell on Rishabh Pant and Hanuma Vihari. Pant came in the middle after not having much success in his last ten innings in whites (with only one fifty under his belt). Thus, the swashbuckling left-hander had a point to make with India also in search of a partnership.

Nonetheless, Pant got involved in a heated exchange with forward short-leg fielder Rassie van der Dussen. The South African had some talk with the left-hander, trying to deter his concentration and probably reminding him of his controversial dismissal on Day 2, whereas Pant also didn't back out. For the unversed, Rassie was given out controversially on Tuesday (January 4), after he edged one to the keeper but the ball seemed to have touched the ground before being plucked by Pant.

Thus, Rassie probably tried to remind Pant of his dismissal and aimed to dent his focus. Whatever was the talk, the 24-year-old Pant didn't hold back and replied by saying, "If you have half knowledge, then keep your mouth shut." Here's the video of their heated interaction:

However, Rassie got the better of Pant as the latter soon danced down the track to take on bowler Kagiso Rabada and fell for a three-back duck. After his departure, India were held by a quickfire 28 by Shardul Thakur and Hanuma Vihari's 40 not out as visitors were all-out for 266, setting up a competitive 240-run target for the home side.

India already lead the three-match series 1-0. If they win the J'burg Test, this will be their first-ever series win on South African soil.