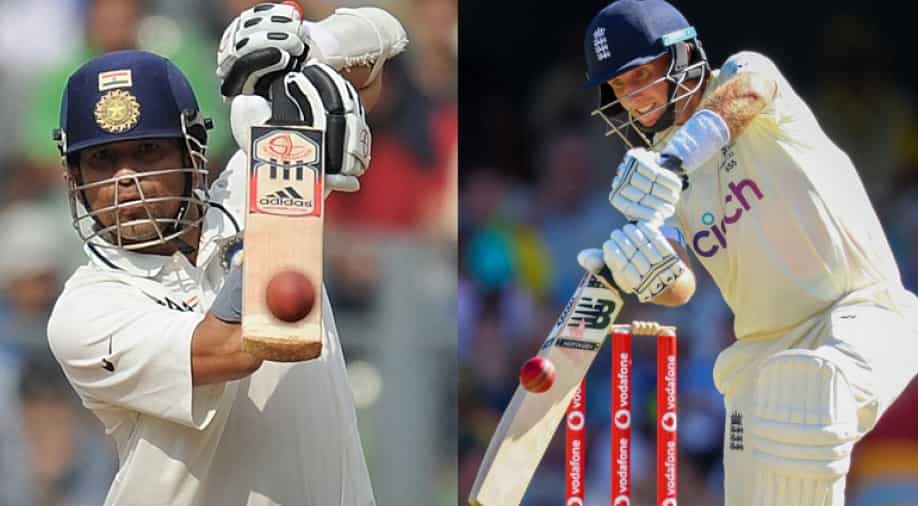 Joe Root slammed an unbeaten 86 in England's second innings on Day 3 of the ongoing Ashes opener between Australia and the visitors at The Gabba. Root is on the verge of breaking Sachin Tendulkar and Sunil Gavaskar's record in the Test match.

England captain Joe Root has been enjoying stellar form with the willow in Tests so far this year. He is the highest run-getter in the longest format as far as 2021 is concerned and is now closing in on the records of the legendary Sachin Tendulkar and Sunil Gavaskar after a brilliant knock of unbeaten 86 in England's second innings of the ongoing 1st Ashes Test against Australia at The Gabba in Brisbane.

After being dismissed on a duck in the first innings, Root bounced back with a superb knock under pressure in his side's second innings to help England fight back in the game. Root scored 86 runs off 158 balls with the help of ten fours and added a crucial unbeaten stand of 159 runs with Dawid Malan (80) to help the visitors end Day 3 on 220/2, trailing the Aussies by 58 runs.

With his unbeaten 86, Root surpassed former England captain Michael Vaughan to bag the record for most runs by an English batter in a calendar year in Test cricket. Root has now taken his tally to 1541 runs in Test matches this year and is on the verge of breaking the records of the legendary Sachin Tendulkar and Sunil Gavaskar.

Root is currently placed eighth on the all-time list of batters with most Test runs in a calendar year. The list is topped by Pakistan's Mohammad Yousuf, who notched up a stunning 1788 runs in just 11 Test matches in 2006. Yousuf is followed by West Indies legend Viv Richards (1710 runs in 1976) and former South Africa captain Graeme Smith (1656 runs in 2008) at the second and the third spot respectively.

Root is just four runs away from overtaking former Australia captain Ricky Ponting, who scored 1544 runs in Test matches in 2005. Root can also break the records of Sachin Tendulkar and Sunil Gavaskar, who are placed fifth and sixth respectively with 1555 and 1562 runs in a calendar year.

Most runs in a calendar year

Root has been in sensational form in the whites for England this year. He has two double hundreds, six centuries and two fifties to his name so far in the year 2021 and is just 22 runs away from overtaking both Gavaskar and Sachin to take the 4th spot on the elite list of batters with most runs in a calendar year.