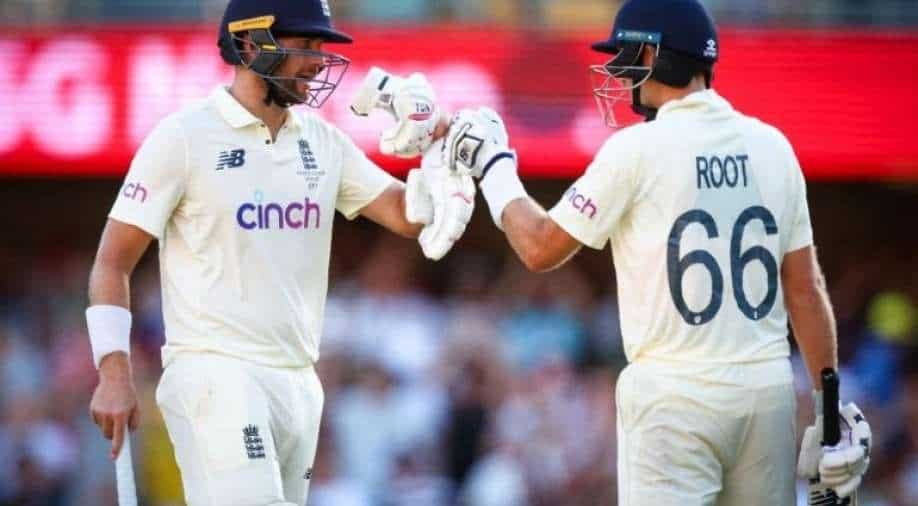 Dawid Malan and Joe Root's spirited fightback helped England close day three of first Ashes Test at The Gabba on a high as the tourists reached 220/2 at stumps, trailing by 58 runs.

The 159-run partnership between Malan (80 not out) and Root (86 not out) has set the scene for an intriguing day four with eight wickets in hand. It was the day where England finally managed to claw their way back into the match after Australia took a lead of 278 runs.

The tourists were 61/2 after 21 overs when Root joined Malan in the middle. Australia skipper Pat Cummins had taken the first wicket, with Rory Burns trying to cut but the short ball took the glove edge behind to keeper Alex Carey. Haseeb Hameed looked set for a big score before getting strangled down leg off Mitchell Starc in the 21st over.

From that point, the fightback began with Root and Malan adding 46 runs off 90 balls till tea came. Malan was tentative in the beginning and Root took 20 balls to hit his first boundary of the innings, a clip through mid-wicket off Josh Hazlewood.

Though the duo had their own shares of luck and survival, especially for Malan against off-spinner Nathan Lyon, the duo turned the tide in the final session, playing with fluency and positivity as pitch started to become very good for some scintillating strokeplay.

The partnership grew in confidence and runs as England made 113 runs in the final session but did not lose a single wicket. Add to it, Root went past former skipper Michael Vaughan for most Test runs by an England player in a calender year.

Starc, Cummins (with his short-ball plan) and Lyon along with other bowling options in Cameron Green and Marnus Labuschagne weren't able to trouble Malan and Root much. But now it seems that the second new ball could provide Australia with much-needed breakthrough and could begin with Hazlewood, who was given just eight overs in the final session.

Earlier, Travis Head, resuming from his overnight score of 112, started off in his aggressive fashion on day three with a pull through square leg off Chris Woakes. Starc gave him good company by smashing boundaries against Woakes, Ollie Robinson and Mark Wood.

Though Starc fell to Woakes, Head was unperturbed as he slammed a six each off Stokes and Wood over mid-off and fine leg respectively, before slog-sweeping Jack Leach through wide of mid-wicket to bring up his 150.

Head was eventually bowled for 152 off 148 balls by a cracking yorker from Wood, becoming the last wicket to fall as Australia were 425 all out in 104.3 overs. Head's stands with Starc (85 runs) and Lyon (29 runs) were crucial for the hosts in stretching their lead to 278 runs, something which may not turn out to be enough if Root and Malan's association continues on Saturday.