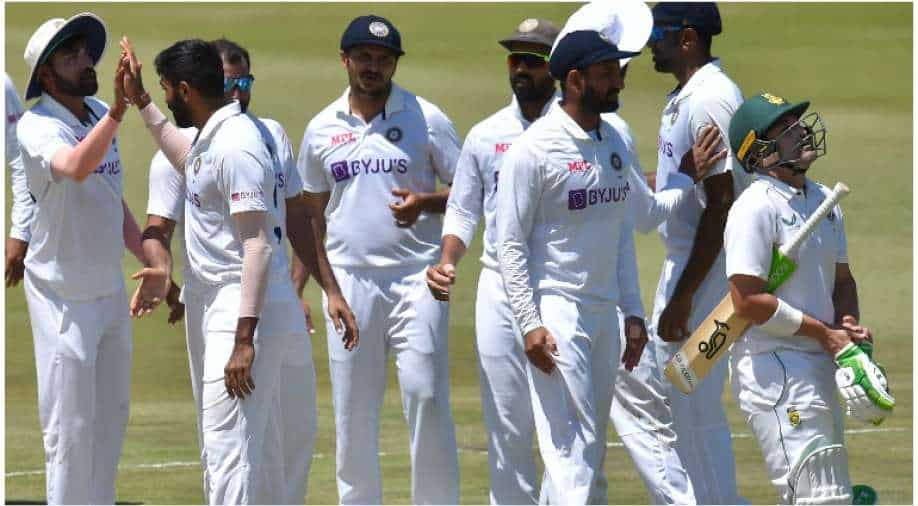 India romped past South Africa by 113 runs to win the first Test at SuperSpork Park, Centurion on Thursday (December 30). Setting up a target of 305 runs, Virat Kohli-led India had accounted for 4 wickets of the Proteas in the final innings at stumps on Day 4 and wrapped up the proceedings in the second session of the final day on Thursday.

With this, India achieved their first-ever Test win at Centurion, a venue where South Africa were unbeaten since 2014. Thus, Kohli & Co. have taken a 1-0 lead and will be aiming to win their maiden Test series in the African nation when the second and penultimate Test commences on January 3, at The Wanderers, Johannesburg.

Talking about the Centurion Test win, KL Rahul's 123 and Mayank Agarwal's 60 (both in the first innings) were the top-performers for India with the bat whereas the seamers led the charge with the red cherry. Jasprit Bumrah ended with five scalps in the mach, Mohammed Shami finished with an eight-wicket haul whereas Mohammed Siraj accounted for three wickets and Shardul Thakur took two wickets in the entire contest (taking 18 out of the 20 Proteas scalps). The likes of Ishant Sharma and Umesh Yadav warmed the bench; depicting the solid bench strength of the Indian pace battery at present.

After the Centurion Test, former Indian opener-turned-commentator Aakash Chopra, in a video on his YouTube channel, reserved the title of 'special' for Bumrah. However, when it came to naming the No. 1 speedster in the Indian team taking all venues into account in whites, the former opener picked Shami.

"You look at Bumrah because he's special. But if we equalize every condition, India's number one Test pacer is Mohammad Shami, especially at this point in time. He asks questions with the delivery of his. He took five wickets against this team in Vishakhapatnam as well and now he took a fifer at Centurion," Chopra explained.

"We saw sideways movement from Ngidi, Rabada's pace and saw Bumrah's magic. But what about Shami? Shami doesn't bowl a magic delivery like Bumrah does. But he bowls on dangerous areas consistently and releases the ball with so close to the stumps. Who bowled the most deliveries on fourth stump? Who bowled the maximum deliveries that were hitting on top of off? - It was sensational Shami," he added.

"Jasprit Bumrah is a national asset. He's a treasure. We are so fortunate that our fast bowling unit has matured together. Bumrah took important wickets at important phases of the game. He set the tone by dismissing Dean Elgar in the very first over (first innings). Then, on Day 4 when there was a partnership building up for South Africa, he bowled a magical ball to van der Dussen. Then Keshav Maharaj came to the crease, and mind you, he bats well."

"Bumrah wonderfully bowled a yorker to dismiss him. He then took Elgar out again but with a different kind of a delivery. I mean he (Bumrah) is brilliant, man," the former cricketer opined.

India will now shift their focus to winning the second Test and claim their first-ever series on African soil. In 2006/07 tour of SA, India had taken a 1-0 lead under current head coach Rahul Dravid, however, lost the plot from thereon to lose 2-1. Hence, the national side will be eager for history to not repeat itself this time around.