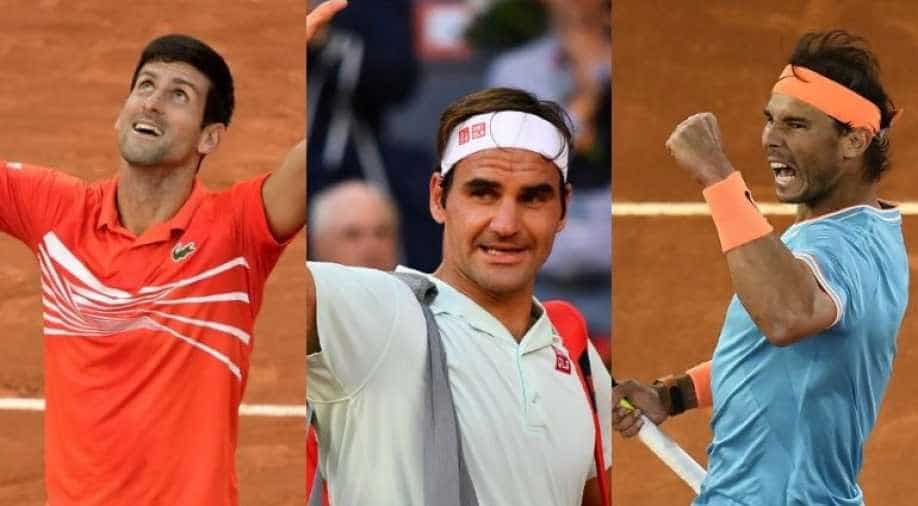 Roger Federer, who reached the quarter-finals with a 2-6, 6-4, 7-6(7) win over Borna Coric, Rafael Nadal and world number one Novak Djokovic also romped into the last eight with straight sets wins

An action-packed day at the Italian Open was marred by an astonishing outburst from Australian Nick Kyrgios, who was expelled from the tournament after going wild in the third set of his match against Casper Ruud on Thursday.

The incident overshadowed an outstanding day for Roger Federer, who reached the quarter-finals on his return to the tournament for the first time since 2016 with a 2-6, 6-4, 7-6(7) win over Borna Coric, having earlier beaten Joao Sousa.

Holder Rafael Nadal and world number one Novak Djokovic also romped into the last eight with straight sets wins on a day featuring double bills for the top seeds after rain wiped out Wednesday's play, with the Spaniard dropping only two games.

Kyrgios made an unsavoury exit from the tournament.

Trailing 2-1 in the third set, the Australian slammed his racket into the ground, kicked a water bottle and tossed a chair towards the centre of the court before he shook hands with the umpire and his Norwegian opponent Ruud and walked out.

The outburst came after Kyrgios got a code violation for unsportsmanlike conduct.

Having already been handed a violation earlier, it meant the umpire also handed Kyrgios a game penalty.

All that came after the 24-year-old ripped into Djokovic and Nadal in a podcast, having also misbehaved in his second-round match with Russian Daniil Medvedev on Tuesday.

Several hours after slamming a ball over the Foro Italico's stands and bending over to turn his backside on Medvedev, Kyrgios branded Nadal a sore loser and the Spaniard`s uncle Toni an "idiot" for saying the Australian lacks education.

Speaking to tennis writer Ben Rothenberg on the ‘No Challenges Remaining’ podcast, Kyrgios also said Djokovic was "an unbelievable player" and "a champion of the sport" but added that the Serb was too desperate to be admired like Federer.

"I just feel like he has a sick obsession with wanting to be liked. He just wants to be like Roger," Kyrgios said.

The 37-year-old fan favourite Federer rolled back the years to beat Sousa 6-3, 6-4 in the morning before staging a gritty comeback to edge Coric after saving two match points in the third-set tiebreak.

The Swiss maestro had looked every bit his age in the opening set against Coric, 15 years his junior, as the Croatian pummelled his rival with stinging baseline shots.

Federer bounced back in the second as he carved out a 5-2 lead and clinched the set after Coric, who briefly stayed in it with a break of serve, sent a forehand beyond the baseline.

With both players producing an array of spectacular shots, games went with serve all the way to the tiebreak, when Federer produced his best shots with his back against the wall.

"It was very tight and I got lucky again. The atmosphere was fantastic, exactly how you want the atmosphere to be", a delighted Federer said in a courtside interview.

Second seed Nadal blew away Frenchman Jeremy Chardy 6-0, 6-1 earlier in the day before breezing past Georgian Nikoloz Basilashvili 6-1, 6-0 and Djokovic spent a mere two hours and 10 minutes on the court in total.

The top seed brushed aside Denis Shapovalov 6-1, 6-3 followed by 6-3, 6-0 destruction of Philipp Kohlschreiber in the late match on Centre Court.

Women's world number one Naomi Osaka of Japan also had to double up as she reached her maiden Rome quarter-final with a pair of 6-3, 6-3 wins, overpowering Slovakian Dominika Cibulkova before sweeping aside Romania`s Mihaela Buzarnescu.