IPL 2022: How MS Dhoni's CSK and Rohit Sharma-led MI's debacle was always on the cards 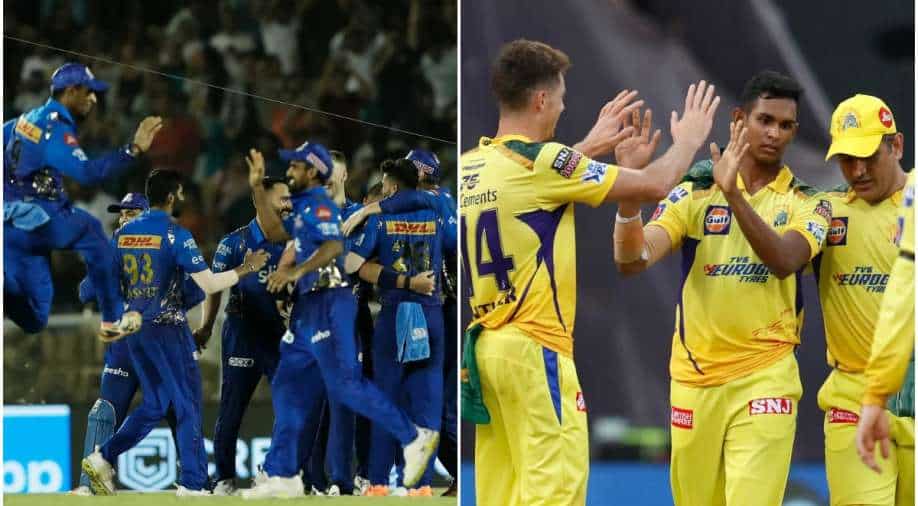 As both Chennai Super Kings (CSK) and Mumbai Indians (MI) are highly-successful teams in the cash-rich league, expect them to bounce back sooner than later. However, their failures in IPL 2022 was never really surprising.

IPL 2022 becomes the first-ever season where both Chennai Super Kings (CSK) and Mumbai Indians (MI) have not qualified for the playoffs. In IPL 2016, both teams were also not part of the playoffs, however, CSK didn't feature back due to their two-year suspension in the spot-fixing scandal. Thus, it surely is the end of a magnificent era.

The MS Dhoni-starrer defending champions CSK ended at the ninth position in the points table. On the other hand, five-time winners and IPL's most successful team Mumbai couldn't avoid the wooden spoon despite a winning end to their forgettable campaign. Both sides returned with four victories and as many as ten defeats each. In fact, this was also the first time both franchises endured nine, or more, defeats in a season. In a nutshell, it can be said that two toppers fell flat and occupied the last two positions in the overall standings as other teams have surely mastered the art of winning big moments against them. However, the bigger question remains -- is MI-CSK's drubbing really a shocker? Well, it was always on the cards.

Many connoisseurs of the game might be quick to point out that the 'law of averages' was always going to bite the two famed sides. However, more than that CSK-MI's muddled approach, questionable team selections, playing styles, strategies, etc. were some notable reasons for their massive downfall.

1) Poor approach to the mega auction: Prior to the season, MI-CSK's team management's approach remained below par. After letting go of some big names in their roster, MI only managed to re-buy Ishan Kishan. Their replacements for the Pandya brothers, Quinton de Kock, Trent Boult, etc. were never really impressive (after including Daniel Sams, Riley Meredith, etc.). The Men in Blue also didn't purchase a solid spinner to spearhead the middle-overs. Murugan Ashwin did impress, however, he was also taken to the cleaners during some high-scorers. CSK, on the other hand, re-bought their core players, who seem to be well past their prime. It was an auction to look ahead, however, CSK's conservative approach sealed their fate then and there.

One might argue that CSK did pick young guns such as Mukesh Choudhary, Maheesh Theeshana, Simranjit Singh, etc., nonetheless, they never cared to properly rebuild their bowling unit. Either they had international bowlers woefully out of form, or only good to chip in with few overs, or it turned out to be too much reliance on youngsters in Deepak Chahar's absence.

ALSO READ | 'I've only seen Zaheer, Nehra do that during my time' - Virender Sehwag lavishes praise on Punjab pacer

2) Captaincy and team management woes: CSK isn't a team that makes headlines for captaincy woes and reports of a rift between a player, or players, and team management. This season saw them tick off both the boxes. Firstly, if Dhoni was sure to give up captaincy to all-rounder Ravindra Jadeja much before the season started, Jadeja still looked like a fish out of the water. His approach was half-baked whereas, in some crunch games, he seemed out of the picture with Dhoni leading the charge. Lastly, when Jadeja relinquished captaincy and Dhoni returned to the post officially, reports of a rift between CSK team management and Jadeja took precedence. Even if the reports have been quashed completely, something was surely not right in the way things were handled in the Yellow Army camp.

3) Dubious selections and strategies: Both MI and CSK have been successful as they follow a similar template, i.e. backing their group of players and accomodating a change in strategy when needed. However, IPL 2022 saw both teams make some surprising calls in terms of team selection and erring in strategies. While CSK admitted to have not read the pitch properly on a few occasions (read Dhoni's post-match comments after their second loss to Gujarat Titans), they didn't back Devon Conway after his failure on debut. MI, on the other hand, dropped Tim David -- who was roped in for INR 82.5 million -- after a few flop shows. Similarly, MI didn't go all-out in the usage of Jasprit Bumrah with him not opening the bowling in several matches. Meanwhile, CSK's rotation of bowlers and top order's timid approach never saw them coming to their usual best. During Jadeja's captaincy, the rotation of bowlers was also not up to the mark.

These factors led to both CSK and MI failing to emerge on top in several close encounters (versus Lucknow Super Giants, Gujarat, Kolkata Knight Riders, Punjab Kings, etc.). There was utter chaos, a lack of role clarity and imbalance among batters and bowlers, especially at the initial stages, to confirm both sides' early exit.

4) Lack of form, injury to key players ruining it all: To add salt to their wounds, Chennai and Mumbai's star players never really stood tall. The likes of Rohit Sharma, Ravindra Jadeja, Kieron Pollard, Ruturaj Gaikwad, etc. never threatened opposition camps with their consistency or form. Bumrah wasn't among wickets at regular intervals, barring a game where he ended with a five-fer, whereas Dhoni, Ambati Rayudu, Dwayne Bravo, and Robin Uthappa did their best but it wasn't enough.

MI and CSK's big buys also underperformed. While Ishan, the most expensive player of this year's mega auction, ended with 400-plus runs, he struck at 121.11. On the other hand, CSK missed the services of Chahar, who remains injured and out of action. Injuries to Jadeja-Suryakumar Yadav in the fag end of the league stage also hurt the wounded CSK and MI line-up.

Hence, both CSK and MI are deservingly out of the playoffs race. As the two are highly successful in IPL, expect them to bounce back sooner than later. However, both MI and CSK need to go back to the drawing board to rethink their approach, and playing style, revamp next year and be more ruthless as the tournament is now much more difficult to crack with the addition of two new teams.