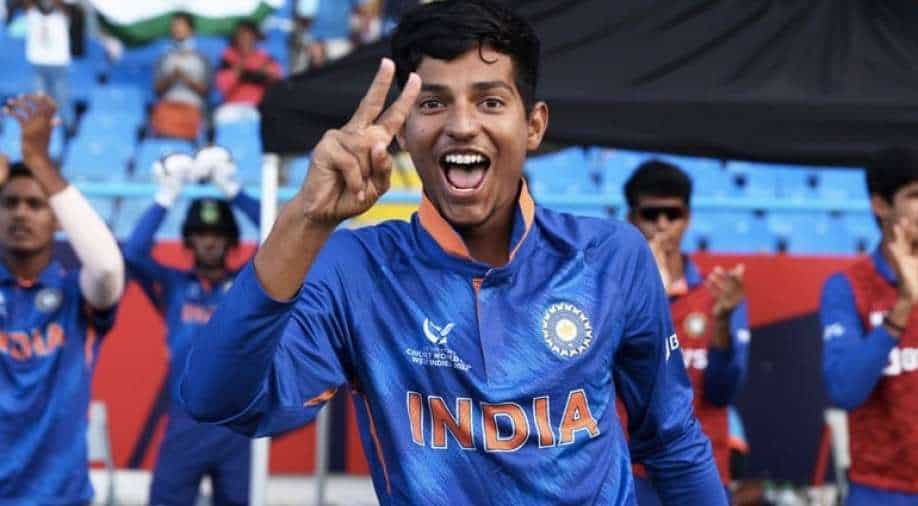 Delhi Capitals acquired India's U-19 World Cup-winning captain Yash Dhull on Day 2 of the IPL 2022 Mega Auction here. After a tussle with Punjab Kings, the local lad was snapped up by the Delhi-based franchise for Rs 50 lakh.

The trainee of Delhi Capitals Academy hogged the limelight in the Caribbean where he overcame Covid-19 to lead India to its record-extending fifth U19 World Cup title.

Having missed out on a few matches due to the dreaded virus, the classy top-order batter marked his comeback with a match-winning 110 in the semi-final match against Australia. The 19-year-old batter notched 229 runs in just four matches at a remarkable average of 76.33 in the recently-concluded marquee event.

ALSO READ: IPL 2022: Who is Yash Dayal? The uncapped player from Uttar Pradesh sold to Gujarat Titans for a high price

Expressing his excitement on being acquired by the franchise, the DC Academy graduate said, "Hi Delhi Capitals. Thank you for showing faith in me and selecting me at the auctions. I have been a part of the Delhi Capitals Bal Bhavan Academy for 8-9 years. So this is a dream come true for me. I am really excited to join the team and I am ready to give my best."

Having acquired the DC Academy prodigy at the IPL 2022 Mega Auction, Delhi Capitals' Interim CEO Vinod Bisht said, "Yash has been a talent who has been spotted 4-5 years back since he was a small kid. At that time, in the earlier avatar of ours, we always wanted to develop the whole idea of doing grassroots cricket and build stories."

"This is an outcome of that effort of 5-6 years. When a 14-year-old young talent came up to us, and we supported him at that time, and then he goes on to become the captain of India U-19 team, and wins the World Cup, and is back into our fold."

He further added, "This was one talent we could not have allowed to go. The very ethos of saying we develop grassroots talent, we develop talent who can become big and we need to support them in the formative years. That's what exactly we have done."

"We have done it in the past with Shreyas Iyer, Prithvi Shaw, Rishabh Pant, and that is a story we want to continue. That is how we build our character brand where we want young talent to come to us and grow with us. We will support them at each and every stage - school, university and then playing for India."

Speaking about the development, Jagrit Anand, Head of DC Academies, said, "It's extremely satisfying and a moment of great pride for us that Yash Dhull has become a part of Delhi Capitals franchise. He has set an example for a lot of younger kids going forward that a pathway to an IPL team can be setting foot at the right place, at the right age, like Yash did at the age. He is an ideal example, not just because of his skills or his talent, but also because of his mindset."

"The fact that he is so calm, and so grounded, it sets a great example for younger kids to become like him, in their own amazing ways. Along with the hard work of the coaches, the entire framework of the academy has worked in his favour."