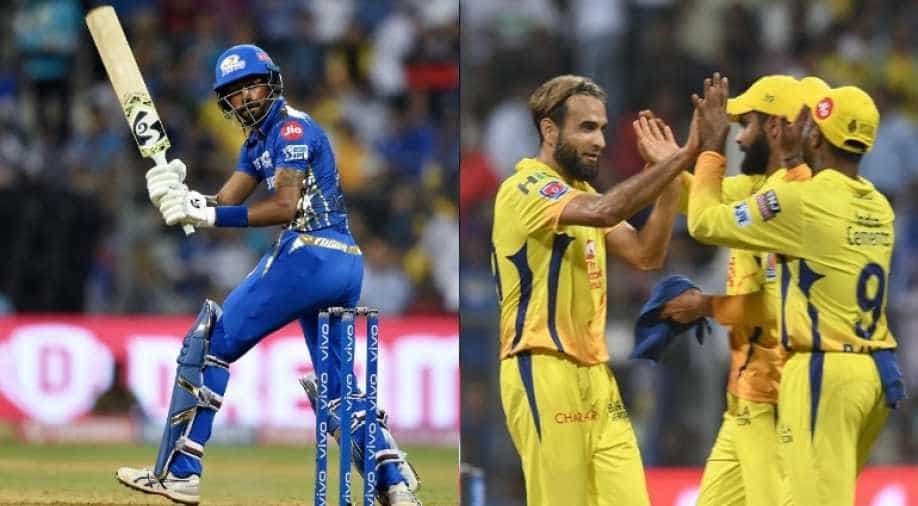 Invited to bat on a track that offered good bounce, Mumbai creamed 29 runs in final over with Hardik doing the bulk of scoring , his eight-ball 25-run blitzkrieg bringing the high-flying visitors to earth.

Hardik Pandya was characteristically quirky as well as breathtaking and the highlight was the helicopter shot in front of its synonym, Mahendra Singh Dhoni, as Mumbai humbled Chennai by 37 runs in the IPL on Wednesday.

Invited to bat on a track that offered good bounce, Mumbai creamed 29 runs in final over with Hardik doing the bulk of scoring, his eight-ball 25-run blitzkrieg bringing the high-flying visitors to earth.

Struggling at 50 for three at one point, Mumbai raked in 45 runs in the last two overs to post 170 for five and then halted their rivals at 133 for eight to post their second win in four games. This was Chennai's maiden defeat and they remained on top of the table with six points.

Mumbai were indebted to a fine knock of 59 in 43 balls by Suryakumar Yadav, who hit eight fours and a six while putting on a half-century stand with Krunal Pandya (42 in 32 balls).

Towards the end, Hardik and Kieron Pollard (17 in 7 balls) struck big to remain unbeaten and boosted the total, with the former striking three sixes and one four and the latter hitting twice over the ropes.

The title holders made a poor start in the run chase by losing their top three batsmen Shane Watson, Ambati Rayudu and Suresh Raina within the power play period, with just 33 on the board.

Watson and Raina were both caught square off the wicket by big West Indian Kieron Pollard, the bowlers to benefit being Lasith Malinga and Jason Behrendorff.

Raina was caught off a full-blooded slash by Pollard who took a spectacular one-handed leaping catch just inside the boundary line to send back the free-stroking left-hander for 16 in 15 balls.

Kedar Jadhav, who looked good in making 58 in 54 balls, with skipper Mahendra Singh Dhoni (12), repaired the damage with a stand of 54.

Hardik struck big by having Dhoni caught at square leg and then sent back Ravindra Jadeja, too, in the same over to reduce Chennai to 89 for five in the 15th over.

The dismissals of Jadhav, who struck 8 fours and a six, and Dwayne Bravo in quick succession ended the slim hopes of the visitors.

Earlier, Mumbai had a slow start and also lost the wicket of Quinton de Kock in the third over with only eight runs on the board.

The arrival of Yadav to the crease increased the run rate as he played handsome drives in front of the wicket on both sides off Deepak Chahar, who he hit for three fours in one over, and Shardul Thakur, who gave away three boundaries in his second over.

Thanks to the stroke-filled start by Yadav, Mumbai ended with 40 on the board at the end of power play, but then lost skipper Rohit Sharma off the first ball of the 8th over, caught behind off Ravindra Jadeja for 13.

Yuvraj Singh, too, flopped, caught just inside the boundary line to leave MI at 50 for three in the 9th over before Yadav and Krunal revived the sagging innings with their half-century stand.