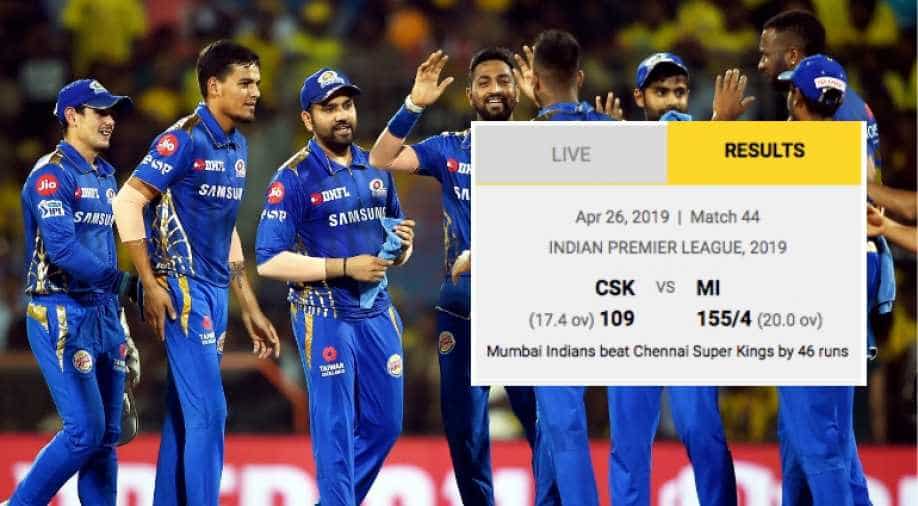 Mumbai will next take on Kolkata on April 28, whereas Chennai will meet Delhi on May 1

Chasing a below-par 156, Chennai without its hero and captain of the ship MS Dhoni, continued to struggle. The host suffered an early blow in the very first over. Shane Watson (8) was caught by Rahul Chahar straight to short fine off Malinga.

Murali Vijay, dropped on 12 at the point, and Suresh Raina tried to readjust Chennai but Hardik dismissed Raina cheaply for two, leading to a flurry of wickets. Vijay tried to shrug off pressure, however, his partner kept changing as Ambati Rayudu for nought, Kedar Jadhav (6) and Dhruv Shorey (5), all departed in quick succession.

Ending the frustration of Mumbai to wrap up Chennai, Jasprit Bumrah delivered a slower ball to Vijay (38), who steered a cut-shot straight to Suryakumar Yadav at the point. Chennai known for its never-give-up attitude tried to recover as Dwayne Bravo and Mitchell Santner combined 33 runs before Lasith Malinga delivered a slow ball to dismiss Bravo (20) on a return catch and Chennai folded for 109.

Earlier, Raina stood in for Dhoni, who missed his second match of the season this time due to fever and sent Mumbai in to bat.

Mumbai faced an early hiccup as Deepak Chahar got Quinton de Kock caught behind for 15. The visitors recovered well in terms of wickets in hand but the scoring remained slow. Captain Rohit Sharma and Evin Lewis added 75 runs for the second wicket.

.@mipaltan climb up the table and move back into the top 2 🙌#VIVOIPL pic.twitter.com/Re9oiB7Slx

Santner proved to be a game changer. Lewis (32) looked to swing the ball across the line but it did not have the distance and was caught by Bravo at deep midwicket off Santner. In the next over, veteran Imran Tahir dismissed Krunal cheaply for one, bringing in Hardik.

Rohit formed a brief partnership with Hardik, adding 21 for the fourth wicket before Santner got rid of Mumbai captain (67), who was caught by Vijay at long-on. Hardik (23*) and Kieron Pollard (13*) tried to attack but Chennai bowlers did not allow them to open their arms. The duo combined 33 to post 155 for the loss of four.

Mumbai will next take on Kolkata on April 28, whereas Chennai will meet Delhi on May 1.