INDvsAUS: India march to brink of victory in Melbourne Test 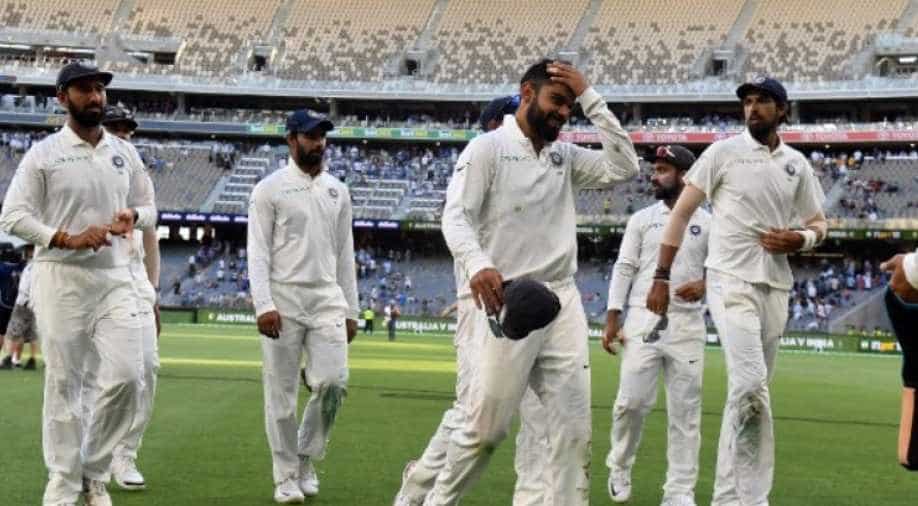 Pat Cummins thwarted India's hopes of closing out the win with a day to spare, anchoring some stubborn tail-end resistance after the top order crumbled.

India moved within two wickets of an emphatic victory in the third Test after reducing Australia to 258 for eight at the close of day four on Saturday.

Having set a mammoth victory target of 399 shortly before lunch, Virat Kohli's team attacked with precision and intensity to leave the home side on life support at the end of a muggy and overcast day at the Melbourne Cricket Ground.

The lion-hearted Pat Cummins thwarted India's hopes of closing out the win with a day to spare, anchoring some stubborn tail-end resistance after the top order crumbled.

The seamer was 61 not out, with Nathan Lyon on six, and Australia still 141 runs short of their victory target.

Having dominated with bat and ball throughout a one-sided contest, the tourists will almost certainly head to the Sydney finale with a 2-1 series lead and a genuine belief they can become the first Indian team to win a series Down Under.

On a grim day for Australian cricket, Cummins was the only shining light for the home side, and recorded career-best figures of 6-27 before Kohli declared India's second innings at 106-8 before lunch.

However, Cummins's heroics will likely be consigned to a foot-note, squandered as they were by the familiar batting failures of his team mates.

Where straight bats were required to provide a platform of resistance, Aaron Finch got his team off to the worst possible start by throwing away his wicket for three with an unsightly cut shot off Jasprit Bumrah that was gobbled in the slips.

Recalled all-rounder Mitchell Marsh was similarly wasteful, slogging spinner Ravindra Jadeja straight to Kohli at short cover to be out for 10.

Having done the hard work to get set in his innings, Travis Head (34) fell on his sword after tea by dragging Ishant Sharma onto his stumps with a dubious drive away from his body.

Amid the help from Australia's poor shot selection, India produced moments of brilliance to remove their more assured batsmen.

Mohammed Shami dismissed Usman Khawaja lbw for 33 shortly after lunch with a peach of a delivery, before Bumrah trapped Shaun Marsh for 44 with a searing ball.

The wily Jadeja proved a constant menace, and induced an edge off Marcus Harris (13) that lodged in Mayank Agarwal's mid-riff.

The left-arm spinner later returned to dismiss wicketkeeper-captain Tim Paine for 26, leaving Australia to rely on their tail and a miracle to stave off defeat.