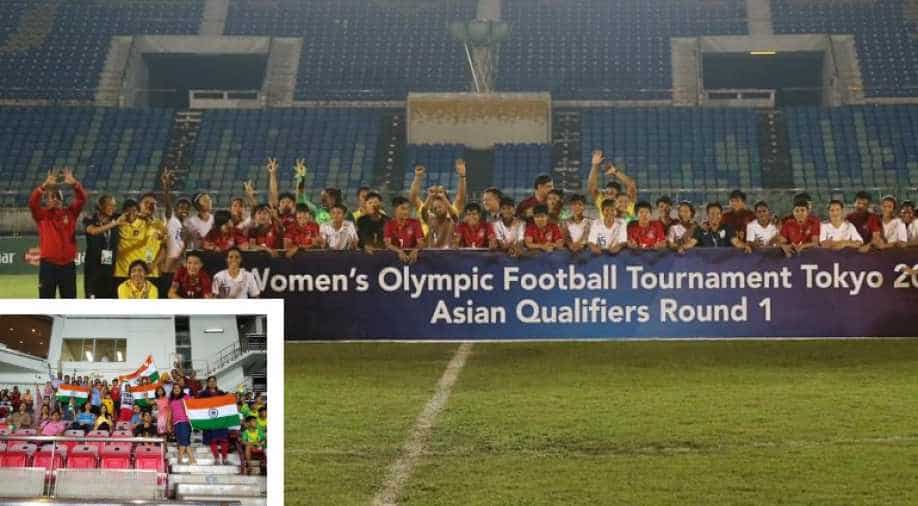 The Indian women's team advanced to the second round after finishing second in Group C with four points from three matches, behind table-toppers Myanmar.

The Indian women's football team on Tuesday qualified for the Olympic Qualifiers second round for the first time, despite going down to hosts Myanmar 1-2 in a hard-fought clash here.

The Indian women's team advanced to the second round after finishing second in Group C with four points from three matches, behind table-toppers Myanmar.

The second round of the Olympic Qualifiers will be played in April next year.

The first half of the match at the Thuwunna Stadium was an exciting affair, with both sides finding the back of the net once.

The Indian team, who went into the match with the same starting lineup from their 7-1 win against Bangladesh, was jolted after conceding a goal in just the third minute.

A cross from the right flank caused havoc in the Indian penalty area and the ball fell to Myanmar's Win Theingi Tun, whose shot deflected off an Indian defender and rolled into the net past custodian Aditi Chauhan.

However, much to their credit, the Indian women responded immediately and pushed forward for the equaliser.

Bala Devi, who scored four in the previous game, found space to shoot from a range but she lost her footing at the last moment in the eighth minute.

The next chance also fell to India's way six minutes later after Sanju charged down the left flank to collect a long-range pass from Kamala Devi and came up with a curling first-time shot. However, the Myanmar keeper was alert and made the save while conceding a corner.

The hosts, who drew their last match against Nepal, looked to catch the Indians out on the counter and created two chances in quick succession.

In the 19th minute, Myanmar hit the Indian crossbar with a long-range effort that rebounded back into play.

India continued their pursuit of the equaliser and were rewarded in the 23rd minute as Grace Dangmei broke free down the right. She was fouled just on the edge of the penalty box.

From the resulting free-kick, 19-year-old Ratanbala Devi unleashed a sizzling shot right into the top corner of the net, leaving the goalie with no chance.

Bala, playing as a playmaker, looked dangerous every time she received the ball.

The second half was also an absorbing affair, with India creating the first chance as Bala Devi's cross-cum-shot from the left flank kissed the top of the crossbar before going out of play.

After that, the home side put continuous pressure on the Indian goal but the defence stood tall in response.

In the 50th minute, Aditi showed her alertness as she dived swiftly to collect a low cross from the right and nine minutes later, produced the save of the match as she dived sharply to her left to keep out a header that seemed to be heading into the top corner of the net.

Bala had another shot saved by the Myanmar keeper but it was Aditi who was India's best player of the second half as she pulled off a number of saves, most notably in the 73rd minute as she flung to her left to palm away a low shot from the edge of the box.

The Indian resistance, however, was broken with just seven minutes to play as Nge Nge Htwe placed her shot low into the corner of the net after a quick break from the hosts.

India pressed for the equaliser till the final whistle and looked to have found one through a header from a corner but the effort, deep into injury time, was cleared off the line by the home side defenders.