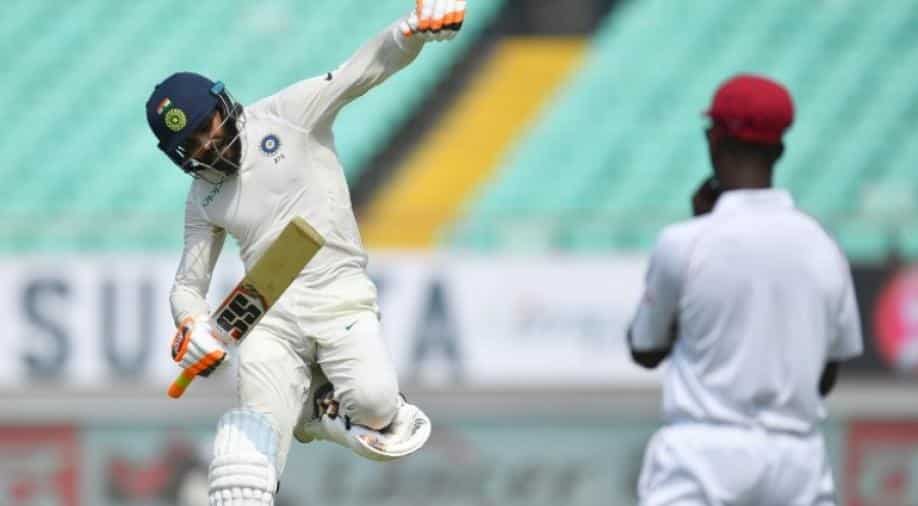 After Virat Kohli's spectacular performance, all-rounder Ravindra Jadeja hit his maiden international century as India declared their first innings on 649-9 on day two of the opening Test against West Indies in Rajkot on Friday.

The left-handed Jadeja remained unbeaten on 100 as the hosts rammed home the advantage after resuming the day on 364-4.

Jadeja enthralled the sparse crowd at SCA stadium with aerial hits which came mainly off the spinners. He ended up with five boundaries and as many sixes.

The morning session was all about Virat and Pant, who missed out on century after a blistering 92-run knock, show but later Jadeja stole the show.

India declare on 649/9 after @imjadeja reaches his maiden international century - will the hosts now perform just as well with the ball?#INDvWI LIVE ➡️ https://t.co/bOSqMElBuo pic.twitter.com/ybtyyuppuF

Kohli, who was 72 not out overnight, took time to knock off the 28 runs needed for yet another hundred while his partner Pant, who resumed at 17, went all guns blazing.
A second Test hundred in his fourth Test was for the taking but Pant, attempting another six over mid-wicket, failed to pick the googly and top-edged it for a simple catch to Keemo Paul at backward point. His entertaining innings was laced with eight fours and four sixes.