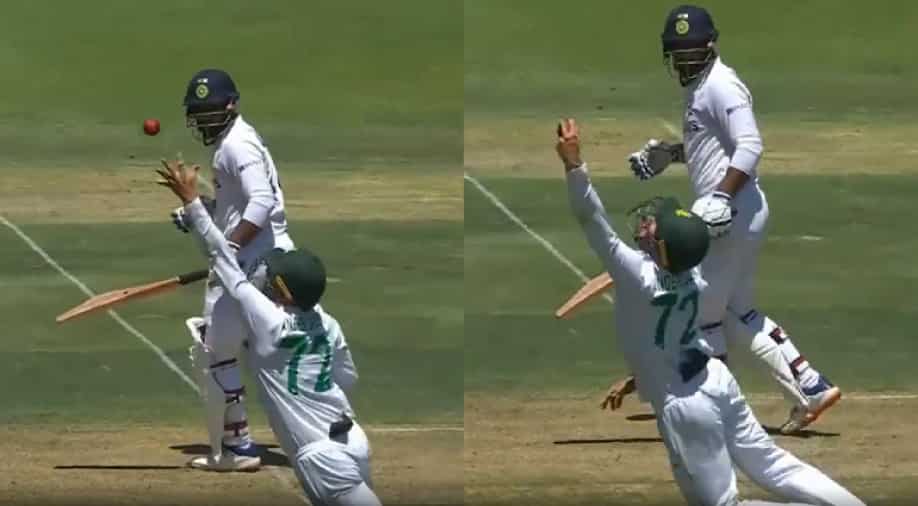 Hanuma Vihari was sent packing after a stunning catch from Rassie van der Dussen in the ongoing second Test between India and South Africa at The Wanderers in Johannesburg. Vihari was going strong in the middle and had settled down well before edging one from Kagiso Rabada for Van der Dussen to take an absolute blinder.

The dismissal took place in the 39th over of India's innings when Vihari was batting on 20. Rabada bowled a quick short ball at the right-hander, who tried to defend it but ended up playing it towards Van der Dussen, who was stationed at short leg.

Van der Dussen was quick to fly towards his left and grab a one-handed stunner to send Vihari back in the hut. The South African fielder's effort left everyone, including the commentators in awe.

Vihari returned to India's playing XI for the second Test after missing the first Test where he had failed to make the cut. He was dropped by Temba Bavuma on 9 and went to score 20 off 53 deliveries. He added a 42-run stand for the 4th wicket with skipper KL Rahul, who notched up a gritty fifty to help India recover after losing quick wickets in the middle.

Openers Rahul and Mayank Agarwal (26) added 36 runs for the first wicket before Agarwal was removed by Marco Jansen. Cheteshwar Pujara (3) and Ajinkya Rahane (0) then departed in quick succession as the duo continued their lean patch. Vihari and Rahul then steadied the ship for India before the visitors lost wickets in a cluster once again.

R Ashwin is currently batting on 44 and is inching towards a well-deserved half-century as India look to close in on the 200-run mark in their first innings of the second Test.