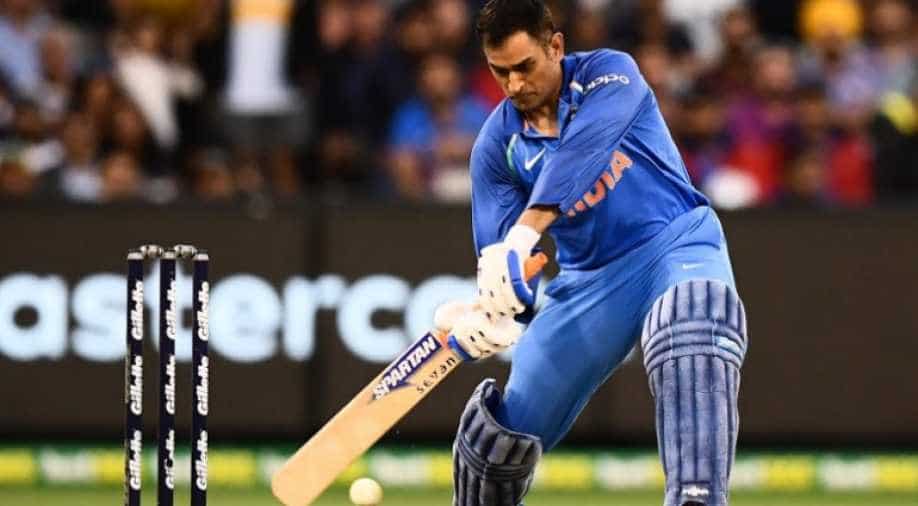 Batting at number four, Dhoni, who generally bats at number six, anchored India's chase with a 114-ball 87 not out which was studded with six boundaries.

Former skipper Mahendra Singh Dhoni Friday said he has no preference in the Indian batting order and is ready to bat at any position as per the need of the team.

Dhoni was adjudged the Man of the Series after he guided India to a comfortable seven-wicket win in the third ODI, thus securing a maiden 2-1 series win in Australia.

Batting at number four, Dhoni, who generally bats at number six, anchored India's chase with a 114-ball 87 not out which was studded with six boundaries.

"I am happy to bat at any number. The important thing is where the team needs me," said Dhoni, when asked where he wants to bat.

Dhoni and Kedar Jadhav shared a 121-run partnership for the unconquered fourth wicket while chasing a tricky target of 231.

Asked what the game plan was, Dhoni said: "It was a slow wicket, so it was difficult to hit whenever you wanted to. No point going after the bowlers who were bowling well, so we wanted to take it deep and that was the plan.

"Of course supported brilliantly by Kedar, who plays unorthodox shots. He did a great job in executing."

India captain Virat Kohli praised the team for the win.

"It wasn't a great wicket to bat on, so we had to take it deep, but they were professional in getting the job done," he said.

"Kedar with bat and ball is always handy. Kuldeep had played a few games, so you don't want to make things too predictable. So we brought on Yuzvendra Chahal, and he played beautifully."

It is the first time India remained unbeaten on Australian soil in all three formats and Kohli said it augurs well for the upcoming World Cup.

"It's been an amazing tour for us. We drew the T20 series, won the Test and the ODI series. We are feeling confident and balanced as a side with the World Cup in mind," he said.

Playing his first match in the series, Chahal sizzled with a maiden six-wicket haul to be adjudged the Man of the Match.

"I enjoyed bowling for the first time in Australia (internationals)," Chahal said.

"The ball was spinning a little bit, so I planned to bowl slow and vary my pace. Looking forward to the New Zealand series."

Australian captain Aaron Finch said: "We took it down to the wire. Our batting in the first couple of games was very good. Maybe we should have set our targets lower on those sort of pitches.

"When you give great players a couple of chances, it's always tough...We did put down chances, but the boys gave it their all. Their batting in the first couple of games was very good."