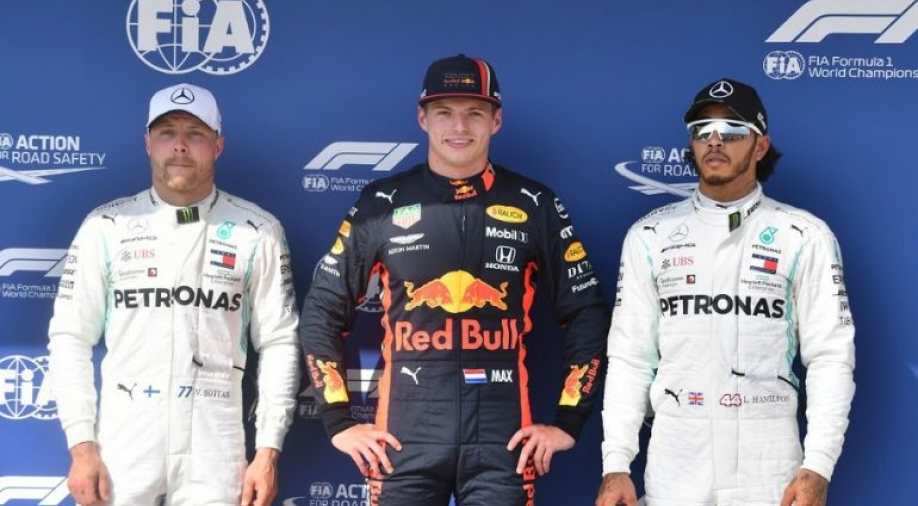 Max Verstappen celebrated his long-awaited maiden pole position with record-breaking speed on Saturday when he topped the times for Red Bull in a tense and closely-fought qualifying session at the Hungarian Grand Prix.

In doing so, he became the 100th different pole-sitter in Formula One, doing so at the same Hungaroring track where his father Jos had claimed his first podium for Benetton 25 years earlier in 1994.

The 21-year-old Dutchman’s first pole came at his 94th Grand Prix and after he has won seven.

Verstappen’s success sparked rowdy celebrations among his large following of Dutch fans in the open grandstands after he had out-paced the two Mercedes drivers Valtteri Bottas and Lewis Hamilton in a breathless finish.

Verstappen’s best lap in one minute and 14.572 seconds was just 0.018 beyond the reach of Bottas with Hamilton a close third – ahead of Ferrari’s Charles Leclerc and Sebastian Vettel.

Pierre Gasly was sixth in the second Red Bull ahead of British rookie Lando Norris and his resurgent McLaren team-mate Carlos Sainz with Kimi Raikkonen ninth for Alfa Romeo ahead of Romain Grosjean.

"I am very happy! There’s still a race to do and at the end of the day, it is the most important, but it’s very nice and it is great for all the team."

In pics: Secrets of mind-boggling pit stop timings in Formula 1

A disappointed Bottas said: "It’s obviously very close with Max. They’ve (Red Bull) been very quick, but as always, there is still the race to come."

Hamilton, who lost time in the first section of his final lap, said: "Max did a great job and so did Valtteri, but we’re in a great position to win – and I am always up for a fight."

The session began in warm conditions with an air temperature of 24 degrees and the track at 45 degrees Celsius, near perfect for a big crowd boosted by visitors from Finland, the Netherlands and Poland.

These fans, backing Bottas, Raikkonen, Verstappen and Robert Kubica, who made his F1 debut in 2006 at the sprawling and sun-drenched basin 25-kilometres north-east of Budapest that houses the Hungaroring track, added colour and noise.

More than 30,000 Poles were reported to have travelled while another ‘orange army’ rooted for Verstappen whose consistency had made him this season’s form driver.

The 21-year-old Red Bull tyro, linked with a possible move to Mercedes or Ferrari in the escalation of ‘silly season’ speculation, demonstrated his current elan when he went top in Q1 by smashing the track record, set by Hamilton in the morning, with a lap in 1:15.817.

That put him top with Bottas and then Hamilton soon up to second ahead of Leclerc who spun heavily and backwards into the barriers at the final corner, damaging his Ferrari.

This left the Monegasque’s pit crew with work to do before Q2 as out went George Russell of Williams, despite a thrilling lap that lifted him to 16th, Sergio Perez and his Racing Point team-mate Lance Stroll, who sandwiched Daniel Ricciardo of Renault, and Kubica in the second Williams.

In Q2 Hamilton was faster again, setting another record in 1:15.548. Bottas was one-tenth down in second until Verstappen went second, 0.025 adrift, setting up the prospect of the young pretender starting on the front row again, alongside the old master.

Hamilton was out first for Q3 ahead of Raikkonen and Bottas, to the delight of the white-shirted fans from Finland.

Hamilton clocked another record only for the Finns to erupt as Bottas took command before Verstappen went inside 1:15 with his lap in 1:14.958 – an unprecedented benchmark.

This double whammy left Hamilton third before the final runs with Vettel fourth ahead of Leclerc. The momentum was moving and ‘people power’ appeared to play its part, not to mention a 13 year age gap, as an inspired Verstappen seized his moment