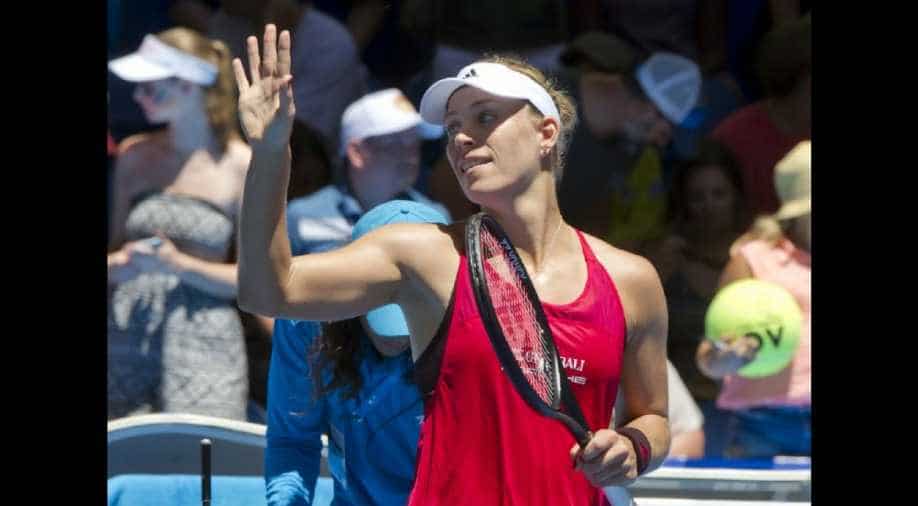 Angelique Kerber of Germany celebrates after defeating Eugenie Bouchard of Canada in their seventh session women's singles match on day five of the Hopman Cup tennis tournament in Perth on January 3, 2018. Photograph:( AFP )

A buoyant Angelique Kerber beat a battling Eugenie Bouchard to lead Germany to a 3-0 win over Canada at the mixed-teams Hopman Cup on Wednesday.

Former world number one Kerber notched her second straight-sets wins in Perth to start the new year, while Bouchard - once ranked fifth but now 83rd - was testy after yet another comprehensive defeat.

Kerber's win gave the Germans a perfect start to the Group A tie. Young gun Alexander Zverev then ensured they remained unbeaten after two outings with an emphatic win over Vasek Pospisil.

In the dead mixed doubles, the Germans completed a clean sweep with a straight-sets win.

If the Germans beat Australia on Friday they will be guaranteed a berth in Saturday's final.

As was the case in her 6-1, 6-4 loss to Australian Daria Gavrilova on Monday, Bouchard barely fired a shot against Kerber in the first set but resurrected her game in the second.

Bouchard opened the match by holding to love. She then had Kerber break point down in the next game before the German veteran steadied.

Kerber steamrolled Bouchard from there to close out the set in just 22 minutes.

At 3-3 in the second set, Bouchard held four break points. But Kerber staved them off, held serve and then strolled through the last two games comfortably to win 6-1, 6-3 in 57 minutes.

The contrasting moods of Kerber and Bouchard told the story, with the former rapidly regaining confidence in her own game after a frustrating 2017 in which she slipped from number one in the rankings to 21st.

"I was feeling very good from the first point," she said. "I was trying to be aggressive and play my game. It is not so easy to play against Eugenie but today it was a good match. It's (her own game) feeling a little bit better than one week ago."

But Bouchard could barely contain her frustration, complaining about match scheduling and the off-court activities in Perth after an error-riddled performance.

The 23-year-old said she was trying not to be consumed by the pressure to climb back up the rankings.

Also, World number four Zverev cruised past the 108th-ranked Pospisil in a 6-4, 6-2 win. The German called it his reward for putting in extra practice after his disappointing singles loss to Belgium's David Goffin on Monday.

The 20-year-old was delighted to have kept his team on track for the final of a tournament which Germany has won twice, most recently through Boris Becker and Anke Huber in 1995.

"We have two wins now in the group, hopefully, we can get one more," he said.

"It is a team competition and we are in a good spot."