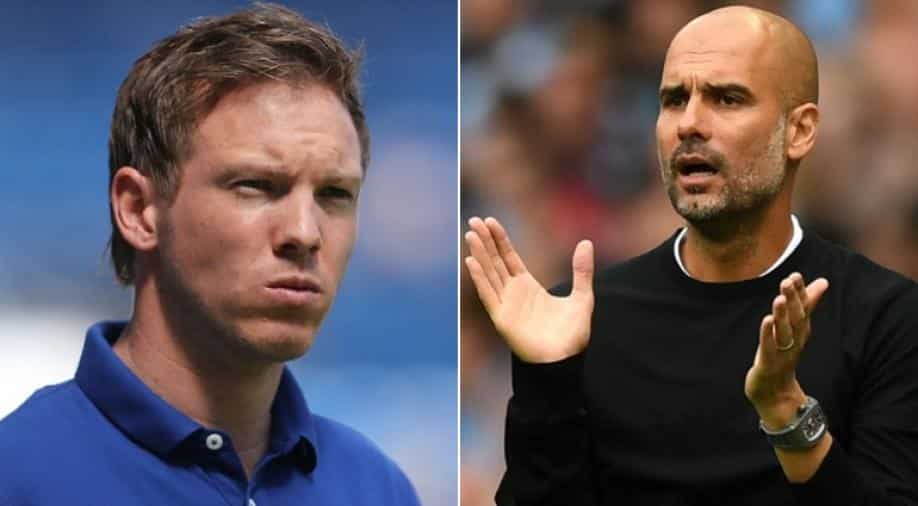 At 31, Nagelsmann is the youngest coach in Champions League history, and admits to being a a keen student of Guardiola's methods.

Hoffenheim coach Julian Nagelsmann is plotting to outsmart his idol Pep Guardiola when Manchester City attempt to get their Champions League campaign back on track by winning in Germany on Tuesday.

At 31, Nagelsmann is the youngest coach in Champions League history, and admits to being a keen student of Guardiola's methods.

"I don't know if it it's always an advantage to know Pep Guardiola, because then you know that he is doing so much the right way or the best way," said Nagelsmann.

"It's not very easy to say exactly how he will set his team.

"He has different ways to play against different opponents.

"As I said, it's not easy to approach his style of play, but I have a few ideas."

In Sinsheim, City will be aiming to bounce back from their shock 2-1 loss at home to Lyon in their first Group F game, while Hoffenheim drew their opener 2-2 at Shakhtar Donetsk.

Guardiola's City beat Brighton 2-0 at home at the weekend to go top of the Premier League, but Hoffenheim suffered their third defeat in six Bundesliga games on Saturday, losing 2-1 at home to RB Leipzig, who the ambitious Nagelsmann will coach next season.

This is the first time Nagelsmann will go head-to-head with Guardiola, who coached Bayern Munich to three consecutive Bundesliga titles from 2013 to 2016 before joining City.

There are elements to Nagelsmann's aggressive style with Hoffenheim which echo that of Guardiola, whose City team also like to press their opponents in their own half.

Neither is afraid to take risks in selection or switch tactics mid-match.

Nagelsmann became a rising star in German football when he was thrust from coaching Hoffenheim's Under-19 team to being tasked with maintaining the senior team in the Bundesliga.

He was just 29 in February 2016 when he took charge of Hoffenheim -- a Bundesliga record for a permanent head coach -- with the team second from bottom.

He only gained his coaching licence a month after his appointment, but the precarious situation did not faze the self-confident Nagelsmann.

Despite his youth, Nagelsmann is street-wise with his answers in press conferences and carefully cultivates his public image.

Just as current Liverpool manager Jurgen Klopp made no secret of his hair transplant while in charge of Borussia Dortmund, Nagelsmann was equally open about his own cosmetic surgery.

He was honest about having permanent make-up on his eye-brows when he sported a new look for the 3-1 defeat at Bayern Munich on the first day of the season in August.

"Women have always been able to wear make-up, I have tried it and I hope it will work for me," he declared.

Such self-confidence is typical of Nagelsmann whose playing career was wrecked by a knee injury in 2008 while playing for Augsburg's reserves, aged just 20.

Current Paris Saint Germain boss Thomas Tuchel, who was coaching one of the Augsburg's junior teams at the time, spotted his potential and had Nagelsmann scout future opponents.

He joined Hoffenheim in Hoffenheim in 2010 as assistant coach of the club's Under-17 team, later coaching the Under-19 team to the 2014 national age-group title when he was less than 10 years older than his players.

Nagelsmann was born in the Bavarian town of Landsberg am Lech and before it was announced this June that he will coach RB Leipzig from 2019/20, the German media saw him as a Bayern Munich coach in waiting.

He fanned the flames last year by revealing he has had a house built in Munich, where his wife's parents live and stated "FC Bayern is a big part of my dream".

For now, the dream is getting one over on Guardiola.

Tokyo 2020: 'It's a big move for Tennis in Greece', says Stefanos Tsitsipas after winning the first round