'Have to score runs to keep you out as an opener': Buttler enjoys hilarious banter with Chahal - WATCH 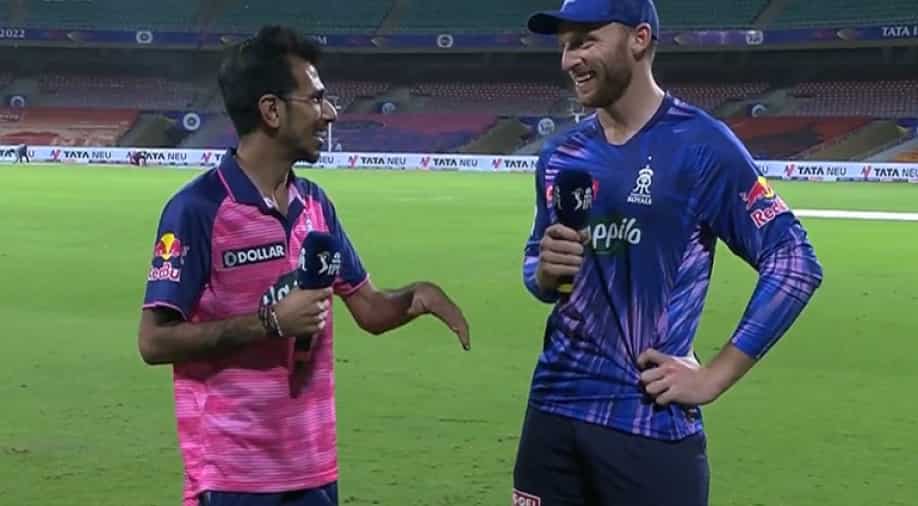 Yuzvendra Chahal was seen enjoying hilarious banter with his Rajasthan Royals teammate Jos Buttler after their team's win over Mumbai Indians in IPL 2022 on Saturday.

Rajasthan Royals (RR) have made a brilliant start to the ongoing Indian Premier League (IPL) 2022 season with two wins in a row in the first two matches. RR thrashed Sunrisers Hyderabad by 61 runs in their season-opener before registering a thumping win over Mumbai Indians (MI) in their second game on Saturday (April 02).

The Royals defeated Mumbai Indians by 23 runs at the DY Patil Stadium on Saturday after successfully defending a total of 193 runs. The Royals rode on Jos Buttler's stunning century (100 off 68 balls) and crucial cameos from skipper Sanju Samson (30) and Shimron Hetmyer (35) to post a strong total of 193 runs on the board, batting first.

Spinners Yuzvendra Chahal and R Ashwin then impressed with the ball as RR managed to restrict MI on 170/8 in 20 overs to register a comfortable win. While Chahal finished with figures of 2/26 in his 4 overs, Ashwin managed a solitary wicket while conceding 30 runs off his four overs.

Post their win, Chahal and Buttler, who were the two heroes of the Rajasthan Royals' victory, caught up with each other for a fun chat. The duo, who have been enjoying hilarious banter on social media ever since the spinner's arrival at the franchise this year, continued to poke fun at each other during the chat.

Chahal was seen asking Buttler if the England opener feels confident opening the batting knowing that the leg-spinner is not batting on top and is there at no.8 or 9. Buttler was quick to come up with a cheeky response and told Chahal how has been looking forward to scoring runs regularly to ensure Chahal can't take his opening spot in the batting line-up.

"Absolutely! Ever since you turned up this year, you have been putting pressure on the opening spot. Have to take my time to score some runs to keep you on the outside," Buttler told Chahal.

Batting masterclass
Almost a hat-trick
A clinical victory @yuzi_chahal chats with Mr. Centurion @josbuttler whose dominating powered @rajasthanroyals to their 2⃣nd win in the #TATAIPL 2022. - By @ameyatilak

Chahal came close to taking his maiden hat-trick in the IPL on Saturday when he dismissed Tim David and Daniel Sams off successive deliveries in the 16th over. However, Murugan Ashwin was dropped off the third ball as Chahal missed out on his hat-trick closely.

Nonetheless. it was a brilliant performance from the leg-spinner, who has taken no time to hit the ground running for the Royals in IPL 2022 and has been among the wickets in the first two matches of the season. RR will be looking to continue their winning run when they face Chahal's former team Royal Challengers Bangalore (RCB) in their next game on Tuesday (April 05).