Fury's knockout ends fight and a trilogy atop the sport 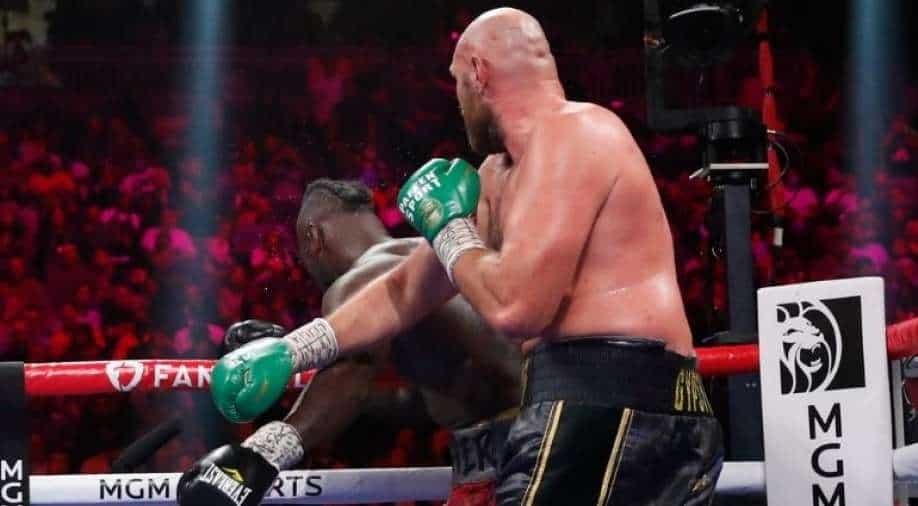 There’s no second-guessing it this time for Deontay Wilder. There’s no one else to blame, either. No trainer threw in the towel. The exotic costume he wore wasn’t as heavy. No judge can award him another fight.

For the second time in 20 months, Wilder tasted the devastating blows of Tyson Fury. Just like then, Wilder lost. In this iteration of the contest we’ve seen three times now, Fury (31-0-1) knocked out Wilder (42-2-1) in the 11th round, dropping him with a right hook near the ropes.

Wilder’s body collapsed limp into the center of the ring and the referee mercifully ended the bout. Fury raised his hands in victory as he walked to his corner knowing that he had retained the World Boxing Council heavyweight belt, which he had stripped from the same man so long ago when to Americans the coronavirus seemed like a distant problem on the other side of the world.

There are no moral victories, but to Wilder’s credit, he competed in a thrilling fight. Unlike their previous meeting in February 2020, Wilder forced Fury into the later rounds, zapping his energy and knocking him down twice. He handled the clinch of the larger man well in the beginning, too. Fury, though, withstood the damage and also knocked Wilder down two times before the knockout. In round 10, Wilder threw a punch, missed and Fury connected with a counter right, sending Wilder to the canvas. Though Wilder recovered, it clearly hurt him heading into the next round, leading to the climatic finish.

“I always said I was the best in the world and he was the second best,” Fury said. “Don’t ever doubt me. When the chips are down, I will always deliver.”

The rubber match’s result should streamline the heavyweight division, which has stalled for months after the pandemic and the court system complicated this trilogy. Wilder most likely will compete against the winner of the fight between Oleksandr Usyk and Anthony Joshua in a title unification bout. Usyk defeated Joshua via unanimous decision last month, and Joshua’s promoter told ESPN that the fighter had exercised his rematch clause.

Fury and Joshua had signed a two-fight deal in March, but an arbitrator ruled that Fury had to complete the trifecta with Wilder. The two also fought to a draw in 2018.

The third fight had been scheduled for July, but Fury and members of his camp tested positive for the coronavirus, postponing the bout until Saturday. In a locker room interview before the fight, Fury said he had contracted the virus twice.

Wilder bulked up to 238 pounds, the largest he ever weighed for his professional career. He fired his former trainer, Mark Breland, and hired Malik Scott, a boxer whom he defeated in 2014, to diversify his approach.

In his last clash with Fury, Wilder said the 40-pound costume he wore weakened his legs. On Saturday, he walked with a minimalist (by his standards) robe. None of those factors saved him, though, from experiencing his second loss, and to the same person.

He will always be remembered as the man who defended his heavyweight belt 10 times, and as a powerful knockout artist. But Fury left no lingering questions and completed this trilogy in a conclusive fashion. The 15,820 spectators in T-Mobile Arena believed it. So did those who watched it on pay-per-view. Like it or not, Wilder will be forced to, as well.

“I did my best but it wasn’t good enough tonight,” Wilder said.

The two men took defensive approaches and did not throw many punches through the early part of the fight. But near the end of the seventh round, Sanchez landed a clean shot and knocked Ajagba down in the center of the ring. It brought the crowd that earlier booed the inaction to its feet.

Sanchez continued to be the aggressor through the end of the bout.

Late in round three, Robert Helenius landed a right hand and left jab that buckled Adam Kownacki’s knees. The salvo was just the latest in a string of combinations Helenius had used to open a lead on the scorecards and raise lumps on his opponent’s face.

Kownacki, Polish-born and Brooklyn-raised, responded with his hardest punches of the fight — a right and a left, both below the belt.

The shots didn’t count, naturally. They bought Kownacki a few minutes to regroup, and a stern warning from the referee, but they didn’t alter the rhythm of the fight. Kownacki, who was undefeated before Helenius knocked him out in their first meeting, in March 2020, is a volume puncher who dialed back his output hoping to tighten his defense.

It didn’t work against Helenius, a 6-foot-7 contender from Finland. Helenius landed jabs, right hands and body punches, and forced referee Celestino Ruiz to consider stopping the fight in Round 5.

Midway through the sixth, another low blow provided the pretense. Ruiz stopped the fight. Helenius celebrated, and Kownacki looked relieved.

Helenius, who served as Wilder’s main sparring partner, is now 31-3 with 19 knockouts.

Anderson Closes Fight in Second Round

Jared Anderson effortlessly defeated Vladimir Tereshkin via second-round stoppage. The 21-year old cleanly stalked the Russian down near the ropes and landed a clean shot that dazed him. The referee, seeing the look on Tereshkin’s face, soon stopped the fight after Anderson landed more blows.

Anderson, a heavyweight from Toledo, Ohio, remains undefeated at 10-0.

Edgar Berlanga, a 24-year-old power puncher from Brooklyn, settled in, survived a knockdown, and won a 10-round unanimous decision over Marcelo Esteban Coceres, using forward movement and heavy punches to raise a welt on Coceres’ left eye. All three judges scored the fight 96-93 for Berlanga.

Berlanga started his career with 16 straight first-round knockouts, a streak that earned him attention but forced his handlers to seek out tougher matchups, against foes he couldn’t overwhelm with pure power. Coceres circled early, boxed cautiously, and whiplashed Berlanga’s head with a left hook in the fifth round. The next round, he rattled Berlanga again with a pair of right hands.

Berlanga took the initiative in the bout’s second half, showing patience and confidence that he could win without relying on raw power. But Coceres dropped him with a counter right hand to the temple late in round nine, showcasing the gap in skill between Berlanga, who remains undefeated, and the 168-pound division’s elite fighters.