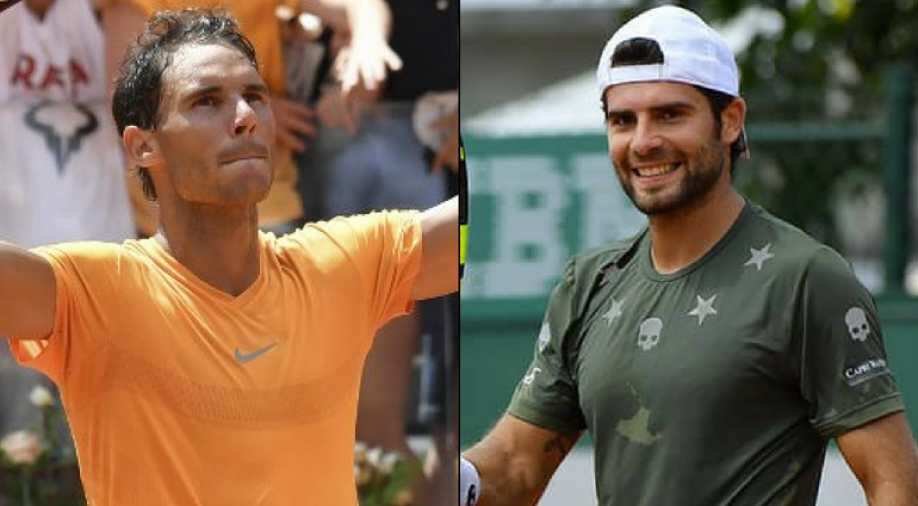 Five matches to watch at the French Open on Monday are:

Nadal starts his bid for an 11th French Open title against grizzled Italian veteran Simone Bolelli who got into the main draw as a lucky loser when Ukraine's Alexandr Dolgopolov withdrew with a wrist injury. Nadal has a record 79 wins against just two defeats in his Roland Garros career and arrives in Paris with his 11th titles in Monte Carlo and Barcelona and an eighth triumph in Rome.

Bolelli, 32, is ranked at 130 and has never got past the third round at Roland Garros. In five meetings with Nadal, he has won just one set.

A run to the semi-finals in Rome gave 2016 Roland Garros champion Djokovic hope that he is finally over the elbow injury which has seen his form dip and ranking slip to its lowest in over a decade.

Dutra Silva, 34 and ranked at 132 in the world, has never progressed beyond the second round in Paris.

But he has made two quarter-finals this year in Sao Paulo and in Istanbul which suggests a degree of clay-court proficiency.

Djokovic won their only meeting in the last 64 at the US Open in 2012, dropping just five games.

One of the most eagerly-awaited returns of recent years will be Serena Williams playing her first major since the 2017 Australian Open. The other is that of Sharapova who was refused a wildcard entry in 2017 by organisers uncomfortable with the 15-month doping ban she had just completed.

Sharapova, the Roland Garros champion in 2012 and 2014, has also been a two-time semi-finalist in Paris.

A run to the semi-finals on clay in Rome and a Madrid quarter-final spot this spring suggests the Russian is fired up.

Hogenkamp, 26 and the world 134, made the second round in Paris last year but lost her only previous meeting with Sharapova in the last 16 at Wimbledon in 2015.

Hogenkamp hasn't won a single match on tour this year, a miserable record which includes two losses on clay.

Former world number one Wozniacki finally broke through to her first Grand Slam title at the Australian Open this year in her 43rd major. Twice a quarter-finalist in Paris, in 2010 and 2017, the 27-year-old has endured a patchy European spring on clay with quarter-final runs at Istanbul and Rome.

Collins, a 24-year-old from Florida, is ranked 44 in the world after a shock run to the semi-finals at Miami in March.

However, she has yet to win a Grand Slam match, losing twice at the US Open and never having played at the Australian and French Opens and Wimbledon.

Wawrinka, the 2015 champion, and runner-up to Nadal in 2017, arrives in Paris under an injury cloud having been laid low by a knee injury which had required surgery last year. Wawrinka missed three months this year before returning in Geneva last week where he won one match.

Wawrinka holds a 7-3 head-to-head record in a rivalry stretching &nbspback to 2005.