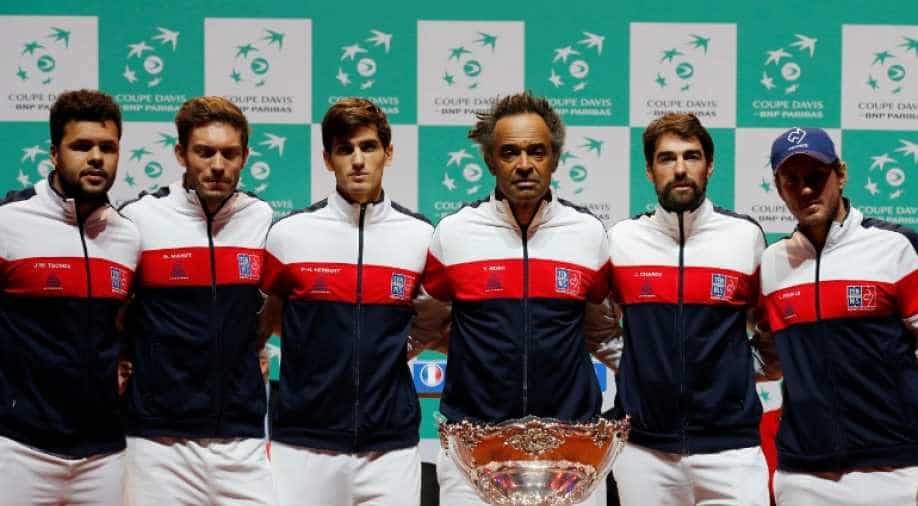 Tsonga, 259th in the ATP rankings, missed seven months of the year because of knee surgery and has played only 11 singles matches this year on the Tour.

France captain Yannick Noah sprang a surprise at Thursday's Davis Cup final draw ceremony when he named Jeremy Chardy and Jo-Wilfried Tsonga as his singles players for the opening day's action in Lille.

Already without the likes of Richard Gasquet and Gael Monfils for the final against Croatia, Noah decided to leave out Lucas Pouille, the top-ranked player in his squad.

World number 40 Chardy will open the tie on Friday against Croatia's Borna Coric with Tsonga then taking on Marin Cilic.

Cilic and Coric are ranked seventh and 12th respectively, making captain Zeljko Krajan's decision on his singles players a straightforward one.

"I'm a little surprised Jeremy (Chardy) plays," Cilic said at the draw ceremony. "I was expecting Lucas and Jo. They will have the opportunity to change on Sunday probably with Lucas entering in the place of Jeremy."

Tsonga, 259th in the ATP rankings, missed seven months of the year because of knee surgery and has played only 11 singles matches this year on the Tour.

He lost in the first round in his most recent tournaments, in Vienna and Paris.

Leaving out the 32nd-ranked Pouille is a potential gamble although the 33-year-old Tsonga, a former world number five, has a fine pedigree and a big-match character. He also played in last year's final when France beat Belgium.

He has lost five of his seven matches against Cilic, although they have played only once since 2015 and Tsonga won their last clash, nearly two years ago in Rotterdam.

Chardy, 31, has impressed Noah during practice and his 2-1 head-to-head record over Coric may have been a factor in his decision. He is 2-3 against Cilic.

"For the last two months I was looking at so many ways, so many options, so many players," Noah, bidding for a fourth Davis Cup title in his last match in charge, told reporters.

"I had to decide whether I was putting first their spirit, their involvement with the team, their recent results, their health, so there were a lot of things coming into play.

"After looking every day at what was happening, I thought the best thing for the team was to start on Friday with these two players."

Sunday's reverse singles would see Tsonga face Coric in a possible deciding fifth rubber, although the captains are allowed to change their teams during the tie.

France are the defending champions and are trying to win the title for the 11th time, while Croatia are seeking to repeat their triumph of 2005 when they won the cup in Slovakia.

Croatia captain Zeljko Krajan said Noah's selections had not taken him by surprise.

"I know he can sometimes take a joker out of his pocket," Krajan said. "It does not always work according to the ranking.

"I thought Chardy could be his joker this weekend. I hope it will not be as successful as usual in the Davis Cup."

The final, being played on clay inside the Stade Pierre Mauroy, which can hold 28,000 fans, is the last one before the century-old competition is revamped next year.

The 2019 competition will do away with the 'home and away' format after an opening qualification round and will culminate in an 18-nation finals week in Madrid in November.

"Playing here is special," said Noah. "It's a weekend that for many reasons is going to be historic."