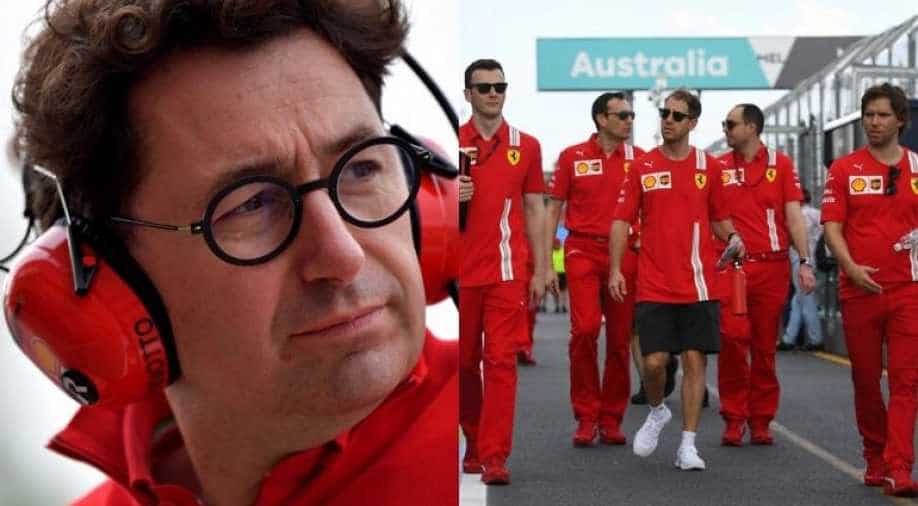 Hamilton, who made clear Vettel's re-entry was dangerous, later admitted if their positions had been reversed, he would have done the same

Ferrari announced on Monday their intention to appeal the controversial five-second time penalty that cost Sebastian Vettel his first victory of the season in the Canadian Grand Prix.

In a move that requires the Italian team formally to support their decision with new evidence within 96 hours, Ferrari kept alive the controversy that followed the stewards' mid-race penalty and resulted in a petulant demonstration of his fury afterwards by the German driver.

Vettel was punished for making an unsafe re-entry to the action after 48 laps after running off track and across a strip of grass, his move squeezing Lewis Hamilton of Mercedes towards a wall and blocking him from trying to take the lead.

Vettel went on to win the race 'on the road', but after his time penalty was applied he dropped to second and Hamilton claimed a record-equalling seventh victory in Canada.

In his annoyance, Vettel launched a tirade against the race stewards, stormed away from the immediate post-race interviews, moved a number two sign from his car to Hamilton's vehicle and declared the race had been stolen from him and Ferrari.

Ferrari later notified the sport’s ruling body, the International Motoring Federation (FIA) of their intentions and now have until Thursday to supply fresh evidence.

'I would do the same'

Hamilton, who made clear Vettel's re-entry was dangerous, later admitted if their positions had been reversed, he would have done the same.

"I watched the replay," he said.

"It was obviously very close. If I was in the lead and I made a mistake and went wide, I probably would have done the same thing because it happened so quick and you're just trying to hold your position," he added.

"When I say I would do the same, I would try to squeeze him too. That's ultimately what happened."

Hamilton, however, defended the existence of the rule which led to the penalty.

"Say you didn't have that rule. I would have kept it lit and we would have crashed. So, one way or not, it was going to go badly," he said.

He said Vettel's move to squeeze his attack was understandable.

"It's a natural instinct that you have. You're not going to go 'actually, I better pull to the left and let everybody go by'. He did block me, but, unfortunately, he went off-track," he said.

"Ferrari were so strong this weekend – a really formidable force.

"We were lucky to be in the battle with them because they could have had a one-two if they had a front row, for example, but, luckily, I was able to stop that."

Hamilton also rejected suggestions comparing Vettel's mishap to the 2008 Belgian Grand Prix, where he was handed a post-race time penalty that gave a race win to Ferrari's Felipe Massa, the last incident of this type to decide a race.

"It was a lot different, but I do understand what it's like to lose a race and it's definitely not the way you want to win," he said.

It was the 12th time a driver who ‘won’ a Grand Prix race was stripped of victory.

Hamilton’s fifth win of the season and third in succession was also the 78th of his career and lifted him 29 points clear of Mercedes team-mate Valtteri Bottas in the title race.

Bottas finished fourth behind Charles Leclerc in the second Ferrari, the first time this season Mercedes had failed to finish with both drivers on the podium. Bottas, however, did clock the fastest lap of the race to gain a bonus point.