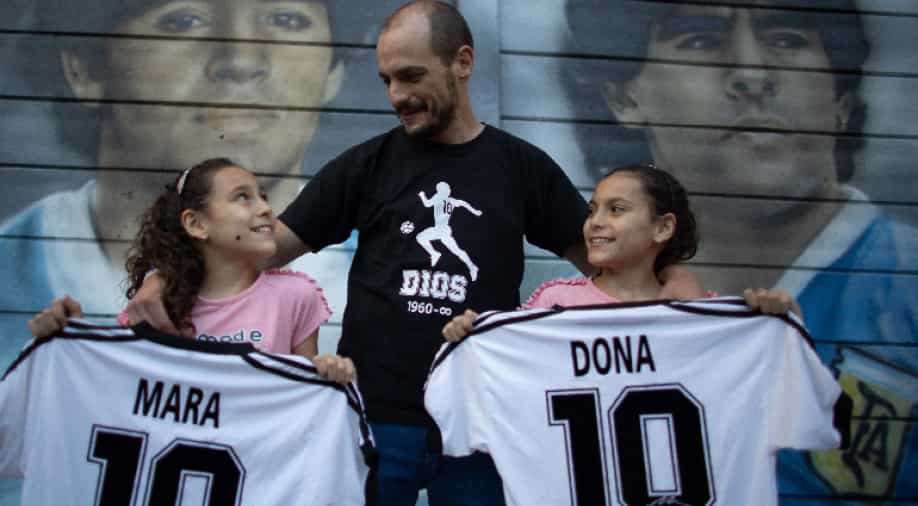 A fan, who had named his daughter Mara and Dono, gave his newborn son the name Diego. Photograph:( AFP )

A fan of Argentine football legend Diego Maradona, who had named his daughters Mara and Dona, has named his newborn son Diego.

Diego Maradona is regarded as one of the greatest footballers of all time. The Argentine legend was blessed with natural talent and possessed sublime ball control and dribbling skills with an eye for goals. He inspired Argentina to their second FIFA World Cup title in 1986 and also managed a number of clubs after retiring as a player.

On Friday (November 26), tributes poured in from all corners on the first anniversary of Maradona's death. The football legend passed away last year after suffering a heart attack at the age of 60. Argentine people paid tribute to the icon by gathering across several different major sites around the country.

A fan - Walter Rotundo, who considered Maradona as his hero, named his newborn son after the football legend. Rotundo had earlier expressed his love for the Barcelona and Napoli icon when he named his twin daughters Mara and Dona after him. His daughters are now ten years old.

39-year-old Rotundo and his wife Victoria had scheduled the delivery on the eve of the one year anniversary of Maradona's death as a tribute to the Argentine football legend. As the couple welcomed a baby boy, they decided to name him Diego.

"Everything went fine, as planned," Rotundo was quoted as saying by AFP on his wife's delivery.

"This day that so many people are sad over Diego, I, too, am sad. But I feel somewhat better because of my son's birth. Now, in the future, this day will continue to be the anniversary of the death of Diego but it will also be my son's birthday," he added.

Rotundo revealed he never got to meet Maradona in person but the Argentine legend knew about his gesture of naming his daughters after him. The die-hard fan had even sent Maradona a picture of himself holding both his daughters in his arms.

Maradona had replied with a picture of himself holding the photo sent by Rotundo. Maradona's response inspired Rotundo to get a tattoo of his hero on his back.