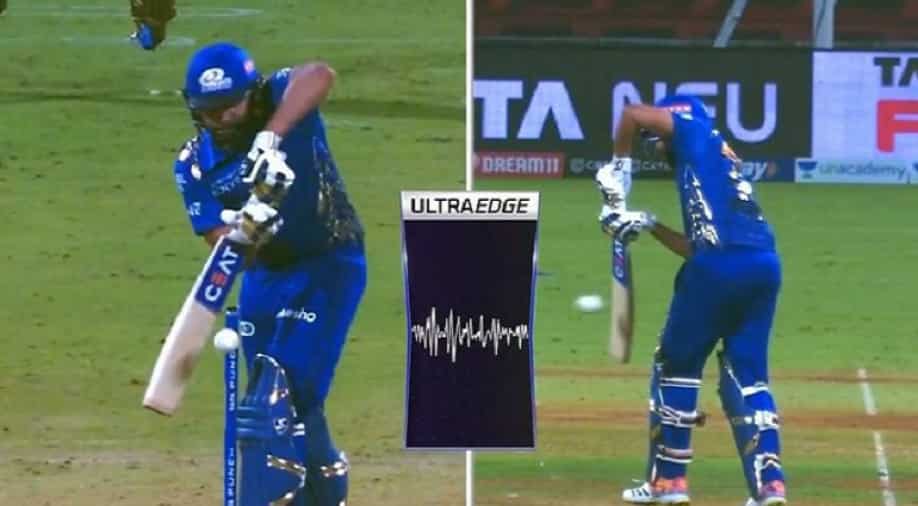 Rohit Sharma was given out controversially in MI's clash against KKR on Monday. Photograph:( Twitter )

Fans expressed their frustration at the third umpire after Mumbai Indians (MI) captain Rohit Sharma was dismissed controversially against KKR in IPL 2022 on Monday.

Mumbai Indians (MI) captain Rohit Sharma's disappointing run with the bat continued in his side's clash against Kolkata Knight Riders (KKR) in IPL 2022 on Monday (May 09). Rohit was dismissed cheaply yet again as he was sent back on 2 after a controversial dismissal against KKR pacer Time Southee at the DY Patil Stadium in Mumbai.

Rohit was dismissed on the last ball of the first over of the Mumbai Indians' innings. Southee bowled a short of length delivery to Rohit cramping him for room. The ball had hit Rohit's thigh pad before KKR wicket-keeper Sheldon Jackon took the catch. However, Jackson was convinced Rohit had edged the ball and asked KKR skipper Shreyas Iyer to go for a review after Rohit was deemed not out by the on-field umpire.

The replays showed there was an edge when the ball passed the bat. However, there was a clear technical glitch in the ultra edge as spikes were witnessed in the replay even before the ball passed close to the bat. Nonetheless, the third umpire was quick to make his decision and adjudged Rohit out.

Rohit was left dejected in the middle as he couldn't believe what had unfolded. The Mumbai Indians skipper was sure he had not edged the ball but he was deemed out and had to leave the ground. The controversial dismissal soon sparked massive outrage on social media as fans slammed the 3rd umpire for the decision.

Anyone who thinks this is out must get his eyes checked @ImRo45 pic.twitter.com/C12DkDYf6H

How can the third umpire not see what we saw? Rohit was NOT OUT #MIvsKKR pic.twitter.com/vuUmzgmTlX

Have Never seeN such a bad umpiring like this seasoN ..

Ultraedge showed spike even before the ball passed near the bat. Unlucky for Rohit Sharma. pic.twitter.com/917bBQB5zg

After Rohit's early dismissal, Mumbai Indians' batting line-up faltered once again in the crucial 166-run chase. Wicket-keeper batter Ishan Kishan struck a gritty 51 off 43 balls but his efforts were not enough as MI's batting crumbled under pressure once again. Mumbai Indians were bundled out for a platry 113 runs to los the game by 52 runs.

Mumbai Indians have now lost as many as nine out of their eleven matches this season and are already out of the race to secure a spot in the playoffs.