Exclusive: 'Waited for this opportunity' - Shahrukh Khan aims to make it big for Punjab Kings in IPL 2021 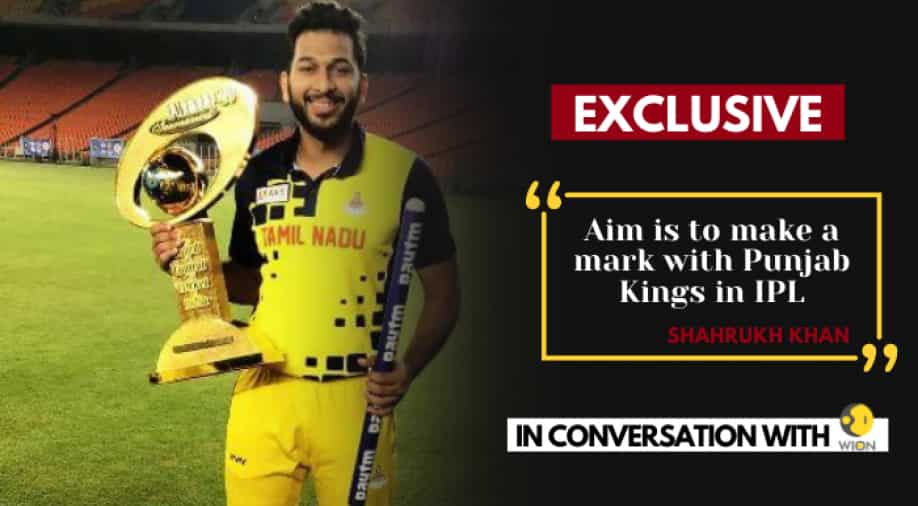 In an exclusive interview with WION, Tamil Nadu and Punjab Kings all-rounder Shahrukh Khan talked about the upcoming Indian Premier League (IPL) 2021, Punjab Kings squad, the role of Dinesh Karthik, R Prasanna and Azhariah Prabhakar in his career, getting into 'finisher mode', and much more.

The long wait to be part of the Indian Premier League (IPL) ended for Tamil Nadu's Shahrukh Khan in the auction ahead of the 14th edition of the tournament when Punjab Kings signed the all-rounder for a whopping INR 5.25 crore. After missing out from the lucrative tournament in the previous season, Shahrukh, standing at 6’ 4'', took his game a notch higher and made a mark as one of the meanest finishers in the Indian domestic set-up.

After impressing in the Syed Mushtaq Ali Trophy and Vijay Hazare Trophy, Shahrukh Khan has set his on the Indian Premier League (IPL) where he will be seen donning the Punjab Kings jersey.

“Really excited and looking forward to IPL. I have waited for this opportunity to come and now it is time to work hard and help Punjab Kings win matches. I can't wait to share the dressing room and the field with some of the biggest names in world cricket and I am sure I will learn a lot from everyone involved in the team,” Shahrukh Khan told WION in an exclusive interview.

The auction table was set abuzz when Shahrukh's name popped up in the domestic all-rounder's list. The name, resembling Bollywood megastar and Kolkata Knight Riders owner Shah Rukh Khan was one of the factors to garner eyeballs. But those who kept a close eye on the matches in the Indian domestic circuit knew a storm was about to hit the auction in Chennai.

When Shahrukh's name was up in the auction, he was with his Tamil Nadu teammates on the bus for Vijay Hazare Trophy training. Delhi Capitals and Royal Challengers Bangalore were relentless in putting up their paddle up to INR 3.40 crore. After that, enter Punjab Kings who got the hard-hitting all-rounder in their squad after outbidding RCB.

“We were in the team bus and everyone there was very excited when my name popped up in the auction. But honestly, I couldn't enjoy it much as my phone was ringing without a break. We were preparing for the Vijay Hazare Trophy as well so the focus was mainly on it. But yes, it was a very happy and proud moment for me,” Shahrukh recalled.

Turn up the volume and listen to the team's happiness for our bright ⭐#IPLAuction pic.twitter.com/wkDfFbqGGP

In the 2019-20 domestic season, Shahrukh Khan was given the role of a finisher by Tamil Nadu. The hunky all-rounder feels it is a role that changed his career graph. But how tough was it to get into the finisher mode?

“I had opened the innings in Tamil Nadu Premier League and for Tamil Nadu as well because we didn't have an opener in our team and I did well. But I feel my physique, power and strength suit the role of a finisher more. I have worked hard to get into the finisher mode and still learning to master the craft. My game has developed more from the time I was given the role of a finisher. I enjoy the role and to win matches for my team thrills me,” the 25-year-old said.

“I have worked hard to get new strokes in my book. To play wide yorkers, hitting length deliveries, to play out of your skin. These are something you need to have as a modern-day batsman. It is not easy at all and requires plenty of hard work and patience,” he added.

Before the cricketing world could witness what Shahrukh Khan – the finisher – could do down the order with the willow, there were blood, sweat and tears to reach the place. While Tamil Nadu captain Dinesh Karthik and assistant coach R Prasanna ensured Shahrukh leaves no stone unturned to learn his new role in the team, it was Azhariah Prabhakar who kept the youngster on track since he was 15 years old. 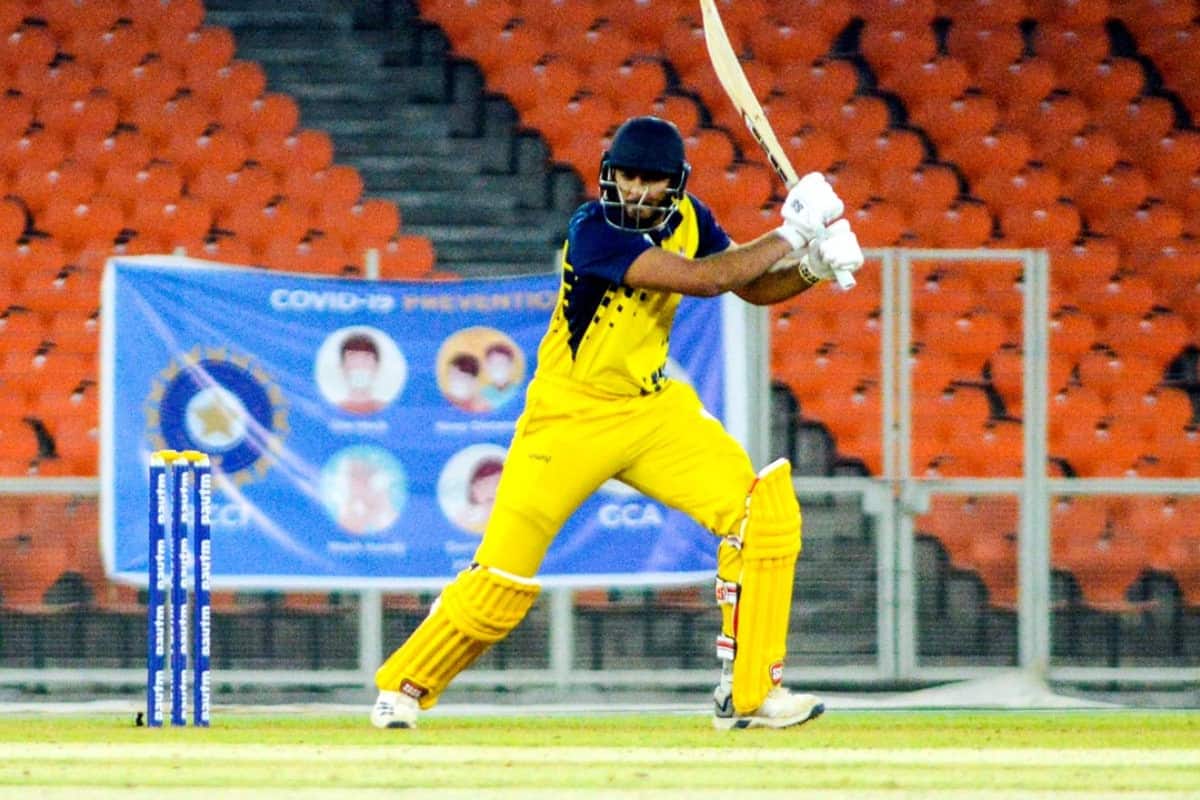 "I have been training under Azhariah Prabhakar since I was 15. I can talk to him about anything, he is like a guardian to me. He has been with me in every failure and success, and I can say I wouldn't have been here without him. He made sure I never diverted from my target.

“R Prasanna and I have had hours of discussions around my game. He made me the fearless cricketer I am at the moment. And Dinesh Karthik is like a father-figure to everyone in the Tamil Nadu squad. He has guided me in every situation and turned me into a finisher. One of the most important aspects he taught me was how to use the crease when you are in that hitting-mode. He gave me the confidence and trust to finish matches. I can't thank Dinesh enough for what he has done for me,” the all-rounder explained.

Will be great to see these young guns setting the #IPL2021 on 🔥... hopefully not against KKR 😜#IPLAuction pic.twitter.com/hbbQIkXa1G

Shahrukh's off-spin has also caught the eyes of many cricket fans and pundits. In the world of T20 cricket, it is a bonus to have a player with multiple skill-sets. While he is not a polished bowler yet, Sharukh is keen to learn more about bowling from Punjab Kings’ Director of Cricket Operations Anil Kumble.

“I was bowling medium pace when at Red Bull Campus Cricket but then switched to off-spin. Bowling is something I really want to improve as I gain experience at the top level. I feel it is important to have good skills in all three departments of the game. Anil sir (Anil Kumble) has told me that we will work on my bowling and I am looking forward to picking his brain and learn as much as I can,” Shahrukh said.

With quarantine over and Punjab Kings taking the field for practice and preparations for IPL 2021, Shahrukh Khan is excited about playing under the leadership of KL Rahul as he said the calm demeanour of the Punjab Kings skipper impresses him the most. He is also looking forward to sharing the dressing room and field with some of the biggest names in world cricket.

“The squad looks great. KL Rahul comes across as a very calm and composed guy and that is something I really like about him when I watch him play. He was superb as a captain last season in how he handled different situations. Punjab Kings have some big-name players and I am looking forward to learning from them. Being with them will definitely help me to improve my game,” Shahrukh said.

When asked what is his favourite format of the game, Shahrukh quipped: "Currently, I am enjoying T20 cricket but Test cricket has always been my favourite."

IPL 20201 commences from April 9 with Punjab Kings playing their season opener against Rajasthan Royals on April 12 in Chennai.