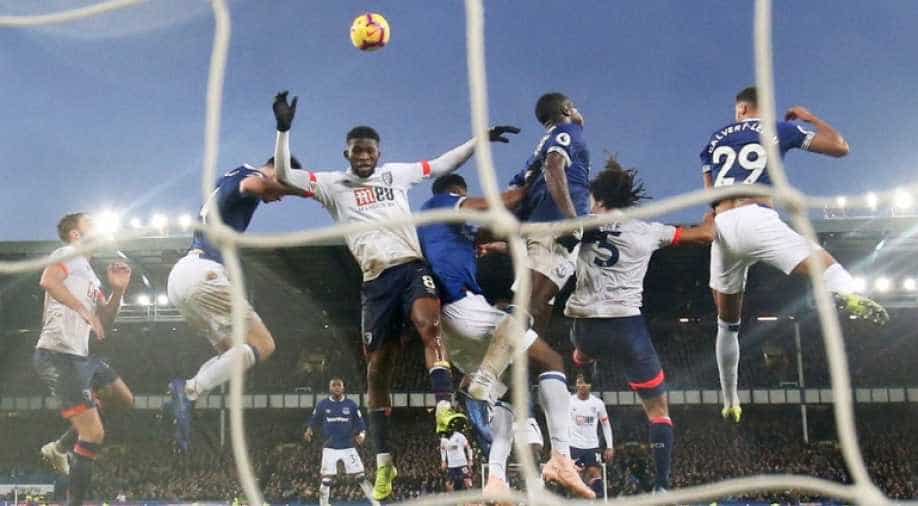 Everton avoided a third consecutive Premier League home defeat as Kurt Zouma's header and a late goal by Dominic Calvert-Lewin earned them a flattering 2-0 victory over Bournemouth at a rainy Goodison Park on Sunday.

There were grumblings of discontent from the home fans as Everton were outplayed before the break but Marco Silva's side improved after the interval to move back into the top half of the table.

"I think the result is really harsh on us today, we competed in a really tough game and we had some chances we didn't take but the scoreline doesn't reflect the performance," Bournemouth manager Eddie Howe said.

"The fighting spirit and determination was on show, we pressed well and we nullified their threats for large spells."

It was hard to disagree with Howe's assessment, especially before the interval when his eye-catching side dominated.

Young Welsh striker David Brooks was a thorn in the Everton defence and he struck a shot against the base of the post in the 14th minute after being played in by Junior Stanislas, who himself nearly embarrassed England keeper Jordan Pickford with a free kick.

Bournemouth also had two penalty shouts ignored before Everton gradually roused themselves, with defender Michael Keane heading against the crossbar shortly before halftime.

Everton began to click after the break and Richarlison's shot was cleared off the line by Nathan Ake.

The hosts took the lead with only their second effort on target in the 61st minute.

Lucas Digne did well to keep a ball in play and his hoisted cross was headed home powerfully by defender Zouma for his first Everton goal since joining on loan from Chelsea.

Everton's second in stoppage-time, struck home excellently by Calvert-Lewin after great work by Ademola Lookman, was harsh on Bournemouth who will wonder how they went home unrewarded.

Everton boss Silva was especially impressed by the performance of 21-year-old midfielder Lookman who is being linked with a move away from Goodison Park.

"It was a fantastic performance and we know he is at that level, but he will improve more and more," Silva said.

"Even if 2-0 is a tough result to take for them, we deserved the points and our players showed big personality and character as a team."

Bournemouth, who had 16 goal attempts, remained in 12th spot with 27 points from 22 games, nine points above the bottom three. Everton moved into 10th spot on 30 points.