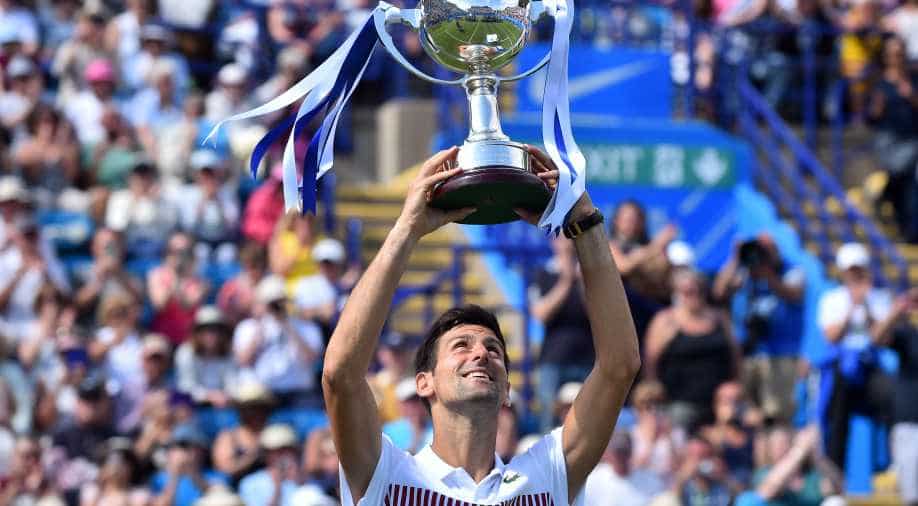 Serbia's Novak Djokovic holds up the trophy after victory over France's Gael Monfils during the men's final tennis match at the ATP Aegon International tennis tournament in Eastbourne. Photograph:( AFP )

Novak Djokovic clinched his first title since January with a 6-3, 6-4 victory over Gael Monfils in Saturday's Eastbourne final, while Karolina Pliskova lifted the women's trophy after defeating Caroline Wozniacki.

Djokovic, playing the week before Wimbledon for the first time since 2010, captured his 68th career title -- but just the second this year -- after downing Monfils for the 14th time in as many meetings.

"It's been a while now that I have been trying to find my best game and kind of consistency with the performance level of tennis," the Serb, whose form has dramatically tailed off since completing the career Grand Slam at last year's French Open, said.

"It hasn't been the case for me in the last 12 months to win many big tournaments.

"But not to get into too deep, it's the way it is, and life throws certain challenges at us when we expect the least. You've got to go out and face the adversities and learn from these experiences and try to evolve, try to grow."

The world number four will face Slovakia's Martin Klizan in the first round at Wimbledon, where he is a three-time former champion.

"It (his Eastbourne campaign) was just a phenomenal experience that I will definitely take with me to Wimbledon," Djokovic added.

"I will not rule out coming back to Eastbourne next year or the following years.

"It was a great buildup, and hopefully I'll be able to take the confidence from here, good level of performance, into London."

The Serb, who will have former players Andre Agassi and Mario Ancic on his Wimbledon coaching team, spent only an hour and a quarter in taming the French second seed.

Djokovic has now won 19 consecutive matches against French players and 56 of 57 dating back to the 2010 Davis Cup final.

He didn't drop serve, while breaking Monfils three times en route to his first grass-court title outside of Wimbledon.

The Czech secured her third title of the season after breaking Wozniacki once in both sets, leaving the Dane still searching for a first trophy since her win in Hong Kong last October.

"I just wanted to play some matches and to see how it goes and to have some hits on grass, especially when I came from Czech (Republic), I didn't practise much on grass," Pliskova said.

"That's what happened, and it came out that I got the title. I didn't really expect this start of the grass-court season, but it gave me a lot of confidence coming to London."

Pliskova needed 80 minutes to win the trophy and become the first top-10 player to win the event since former Wimbledon champion Marion Bartoli in 2011.

The world number three was clinical in going one better than when she lost to Dominika Cibulkova in last year's final, becoming the first Czech to win the Eastbourne title since Jana Novotna in 1998.

The 25-year-old fired ten aces in an impressive serving display, as Wozniacki was unsuccessful on four break-point chances.

Pliskova will go into Wimbledon as one of the favourites for the title, having also reached the French Open semi-finals at Roland Garros last month.