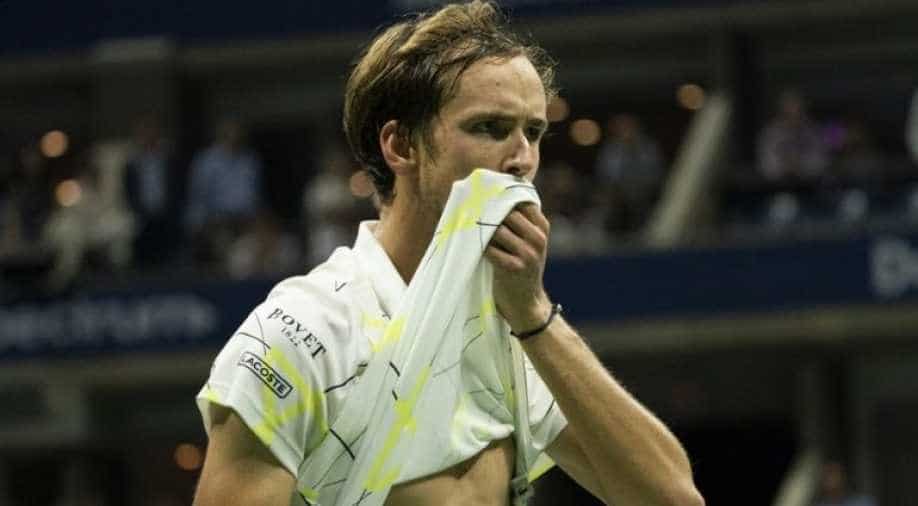 Medvedev, who won his first Masters title last month in Cincinnati, will climb to a career-high of fourth in the ATP rankings on Monday

Daniil Medvedev said he was incredibly proud of a remarkable six-week hardcourt run in North America that culminated with Sunday's agonizing five-set loss to Rafael Nadal in the US Open final.

Medvedev became just the third man to reach finals at Washington, Canada, Cincinnati and the US Open in the same summer, but like those before him -- Ivan Lendl (1982) and Andre Agassi (1995) -- he too finished runner-up in New York.

"It was an amazing match. It's an amazing story. All this summer is amazing for me. I will remember every moment of it," Medvedev said.

"I have a really good memory if we talk about tennis. I'll definitely remember it even when I'm, like, 70 years old."

Medvedev, who won his first Masters title last month in Cincinnati, will climb to a career high of fourth in the ATP rankings on Monday.

"After the summer I had no fear. I had everything to win. I think it's Rafa who had something to lose. I went out there, I gave everything I could, and I'm proud of myself," Medvedev said.

"He was the better one today. I have to admit it. I have no regrets."

The Russian, a first-time Grand Slam finalist, joked he was thinking of what to say during the trophy presentation after losing the first two sets to Nadal.

But Medvedev, spurred on by an electric Arthur Ashe Stadium crowd, tapped into his energy reserves to launch a stirring fightback that had Nadal up against the ropes.

After leveling the final at two sets apiece, Medvedev missed three break point chances in the second game of the decider. He looked beaten after going a double break down, but retrieved one and erased two match points, creating an opportunity to get back on serve as Nadal served for the title a second time.

"Was I close to winning? Yes, one set away. I mean, had break points at 5-4. I will remember everything of it. I will be disappointed with the result, but I will be happy with the way I played, as I say, the whole summer, the whole US Open," Medvedev said.

"My wife always tells me that I have to be happy about myself sometimes, because I'm really self-criticizing. For example, tonight I'm not happy to lose, but I have to give myself credit for these two weeks. It's been amazing.

"Before the tournament, my best result was fourth round of a Slam. I had some physical problems. Sometimes I didn't play as good as I wanted. But I managed to be in the final. I managed to give huge fight to one of the best players in the history of our sport."

Nadal's victory extended the dominance of the "Big Three" with the last 12 major titles won by the Spaniard, Novak Djokovic or Roger Federer.

Medvedev was attempting to become the first man born in the 1990s to win a Grand Slam title. Milos Raonic lost the Wimbledon final in 2016 while Dominic Thiem finished runner-up to Nadal at the French Open the past two years.

"I can say that I'm sure all of us, we're fighting our best to try to make this transition. It's really tough because these guys, they are playing good tennis. I don't know what else to say. They are just playing amazing tennis," Medvedev said.

"It's really tough to beat them, even to get a set from them, even every game to win is tough. We're just doing our best job to try to make it happen sometimes.

"(These) three guys, they are legends. The way they're playing tennis is just unbelievable."

Nadal, who warned the Big Three era is nearing an end, believes the time will soon come for Medvedev.

"He has a great, great future in front. I really believe that he will be able to win Grand Slams, a couple of them," Nadal said.

"In this life, it's impossible to predict the future. But his career looks very, very well."