Cristiano Ronaldo on target as Juventus cruise before Atletico showdown 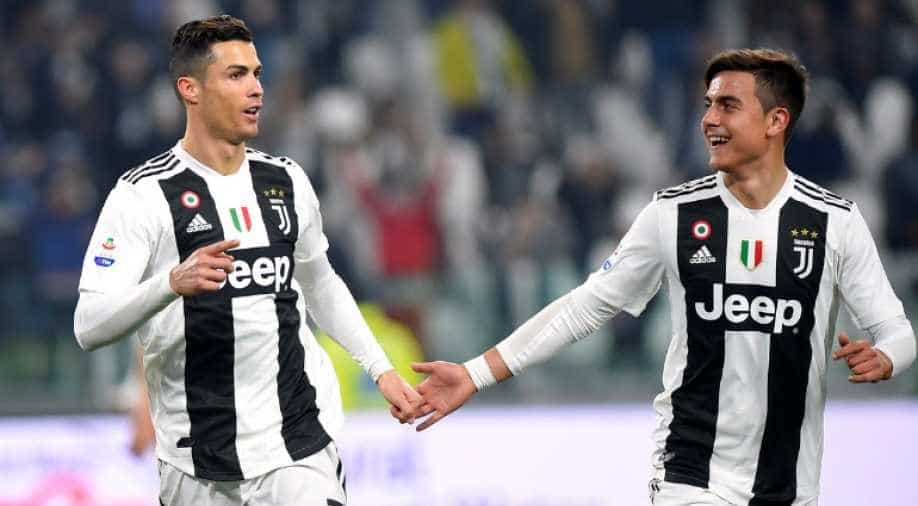 Dybala returned to the front line alongside Ronaldo and Mario Mandzukic with key defenders Bonnucci and Giorgio Chiellini both back from injury.

Cristiano Ronaldo set up Paulo Dybala to score early and added one himself with defender Leonardo Bonucci also on target as Juventussurged 14 points clear in Serie A on Friday with a 3-0 win over lowly Frosinone.

Coach Massimiliano Allegri was taking no chances, even against a side sitting second bottom of the table, ahead of next week's Champions League last 16, first-leg tie at Atletico Madrid.

Dybala returned to the front line alongside Ronaldo and Mario Mandzukic with key defenders Bonnucci and Giorgio Chiellini both back from injury.

"The team is growing in terms of fitness, it's a decisive moment for the season," said Allegri.

Juventus are building towards next week's game in Madrid and a top-of-the-table clash against Napoli in the San Paolo Stadium on March 3.

"We struggled a bit after the winter break but now we are ready to face this important moment of the season both in the championship and the Champions League," added Allegri.

Juventus remain unbeaten this season but the reigning seven-time league champions had been held 3-3 by Parma two weeks ago.

Bonucci returned after three weeks out with an ankle injury along with captain Chiellini who limped off during their shock Coppa Italia exit on January 30.

Ronaldo set up Dybala to rifle in with his left foot after just six minutes in Turin as Argentina forward, who has been overshadowed since the arrival of the former Real Madrid player, scored his first league goal since November 3.

Frosinone goalkeeper Marco Sportiello denied Mandzukic's diving header with Bonucci in place to turn the rebound into the goal.

Ronaldo slotted in his 19th Serie A goal and 21st in all competitions on 62 minutes with Rodrigo Bentancur crossing for Mandzukic who provided the assist for the Portuguese striker.

Ronaldo was then replaced by Federico Bernardeschi with the tie against Atletico in mind, with Sportiello denying Juventus the fourth goalkeeping out a powerful Bernardeschi free kick.

"I'm happy for Paulo, he scored a good goal and that's what strikers live for," said Allegri.

"The game against Atletico Madrid will be very different. It's crucial that we get a goal there, otherwise, qualification would be rather difficult to achieve.

"But this team is growing, we are even better than the first weeks (of the season)."

AC Milan, in fourth, travel to Atalanta, one place below in fifth, on Saturday in a battle for Champions League football next season.