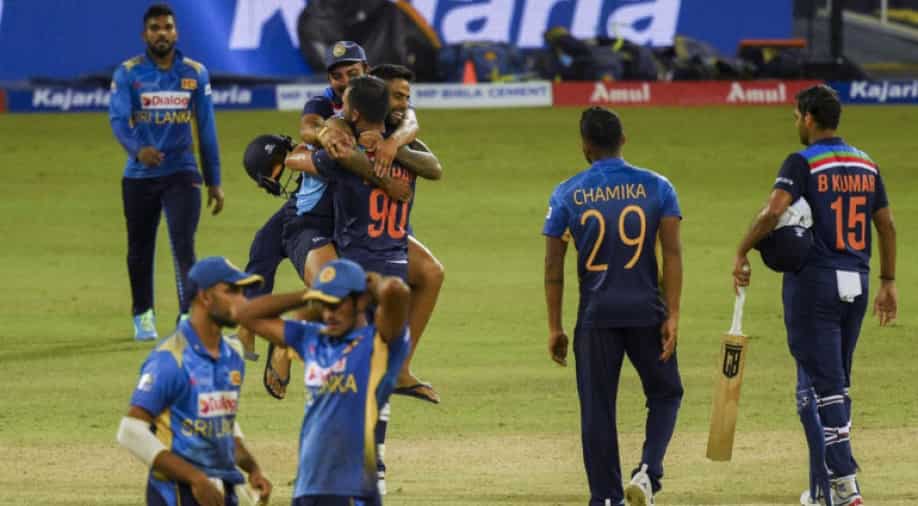 India held their nerve in a precarious run-chase to win the second ODI against Sri Lanka by three wickets and seal the 2-0 lead in the three-match series at the R Premadasa Stadium in Colombo.

After Sri Lanka skipper Dasun Shanaka won the toss and chose to bat, the hosts set up 275 after Avishka Fernando scored 50 off 71.

Charith Asalanka fought hard after quick losses with a knock of 65 off 68 deliveries. Chamika Karunaratne remained not-out on 44 to take the team past 270.

Team India didn't have the best of starts to their chase as they lost Prithvi Shaw and Ishan Kishan early on. There were small partnerships between Shikhar Dhawan and Manish Pandey, and among Manish Pandey and Suryakumar Yadav, yet wickets continued tumbling.

The wicket of Suryakumar Yadav, who batted well for his half-century, was a setback for India. Krunal Pandya's wicket nearly established Sri Lanka's victory.

But a spectacular partnership between Deepak Chahar and Bhuvneshwar Kumar ruined all expectations of the hosts, even driving them out of the series win possibility.

Pursuing 276 runs, Team India were at 160/6 at one phase with Krunal Pandya and Deepak Chahar in the middle. Regardless of being down, the Indian cricketers didn't lose conviction and battled till the finish to grab a victory from the jaws of a rout.

Deepak Chahar (69* off 82 balls) delivered a batting masterclass as Team India returned splendidly to win the second ODI by three wickets.
He surprised the cricket fraternity to take a scrumptious win for his side.