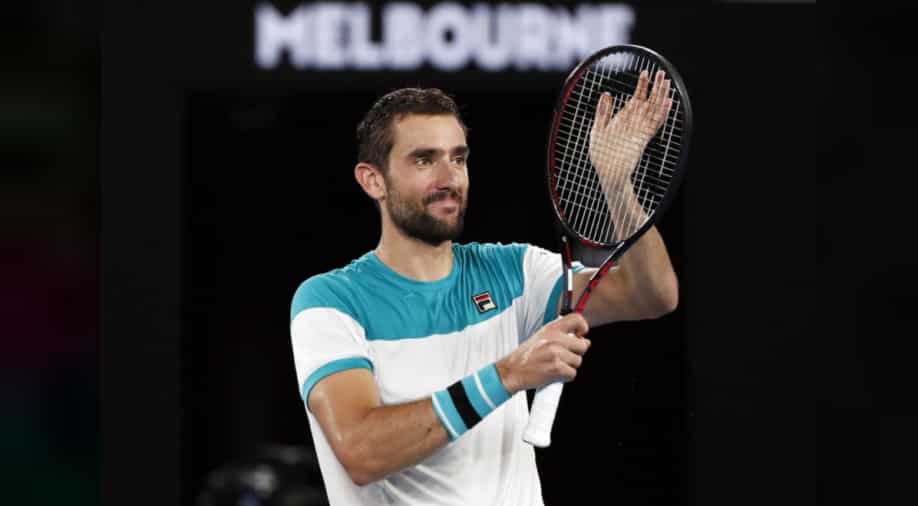 The sixth seed had won his quarter-final when Rafael Nadal retired hurt in the fifth set, and was again ruthless against a hobbled opponent, ending the 49th-ranked Briton's dream run after just two hours and 18 minutes under the lights at Rod Laver Arena.

Sealing the match with a thumping serve, the 2014 US champion will bid for his second Grand Slam title against the winner of Roger Federer and South Korea's rising star Chung Hyeon.

He will enjoy two full days off after his centre court cakewalk which left the largely pro-Edmund crowd cold on a hazy, moist evening.

"I noticed that just in the third game, the third set, when I broke him, he just let a couple of balls go past him," Cilic, racked in sweat, told Jim Courier in the on-court interview.

"(He) had an extremely tough run to the semis, had a couple of five-setters and a couple of four-setters as well. Definitely, it left some scars on his body."

An agitated Edmund took a medical time-out after losing the first set and slowed noticeably in the third, labouring in vain to keep pace with Cilic's baseline missiles.

It was a deflating ending for a match that began with promise when the 23-year-old came out in a blaze of shot-making to grab break points off the Croatian.

The rangy Cilic had all the replies, however, and studiously avoided Edmund's bazooka forehand as much as he could.

Given little latitude to work on his favoured side, a frustrated Edmund unravelled in the sixth game. He slapped a backhand into the net tape and the rebound sent it wide, allowing Cilic the first service break.

There was no tightness in the Cilic's game, and he calmly broke Edmund again, wrapping up the set in 35 minutes with a rocketed forehand to the corner.

Edmund had only a single forehand winner to that point and he exited the court for a medical time-out.

He returned still troubled of mind, and shouted "No!" at himself after bashing into the net when serving at 2-1.

The Briton lost his temper at 15-0 in the following game, arguing with the umpire heatedly over a line call on Cilic's serve.

"Get the referee, I'm not having it," he snapped before being flat-batted by the second match official.

The blow-up seemed to help as he served out to love and kept snapping at Cilic's heels all the way to a tiebreak.

But from there the big Croatian played with sublime control, ratcheting up the pressure with an overhead smash and landing a pinpoint serve out wide to have three set points in a hurry.

Edmund saved one but moments later Cilic was roaring in celebration, after lacing a backhand winner down the line to move within a set of the final.

It looked bad for Edmund, who began hobbling in vain pursuit of Cilic's raids on his backhand.

At 1-1, having been tossed around like a rag doll across the court, Edmund was broken again, slicing a weak retrieve into the net.

Cilic quietly pumped his fist as the crowd was subdued and he quietened the terraces further by breaking the Briton again at 4-2.

An 11th ace and a volley put Cilic a point from the finish before he wound up his serve one last time to put Edmund out of his misery.