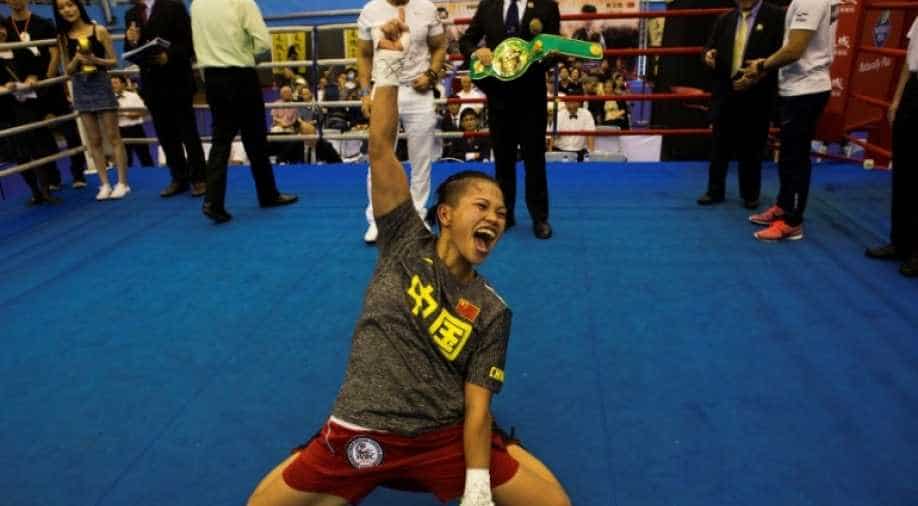 Huang Wensi celebrates her victory after the referee awards her a technical knock-out during the seventh round of her fight against Thailand's Jarusiri Rongmuang. Photograph:( Reuters )

Huang Wensi narrows her eyes and swings her fists towards her opponent, delivering a series of sharp punches before the referee finally separates the two, who have been duelling for seven rounds.

"I made it, my son!" screamed the 29-year-old as she danced in the ring before her rival, Thailand's Jarusiri Rongmuang, from whom she snatched away the Asia Female Continental Super Flyweight Championship gold belt at the match in Taipei.

The dreadlocks-wearing Huang is one of a small but growing number of women in China to embrace professional boxing, relishing its intense nature despite traditional stereotypes that steer women away from such activities.

As a mother, she is also a rarity within a small circle of professional female boxers and clinching her top title on her son's birthday last October made victory all the sweeter.

"A woman is not just limited to being a wife or mother in the house," said Huang, adding that her son, now aged 2-1/2, had jumped for joy during her video call to tell him of the win.

"I live for myself. This makes me truly happy. I hope there are more moms who could see this game. Besides living for family, you could also live for yourself."

Born in a small town in China's southern province of Guangdong, Huang started learning to box in 2002 after a coach spotted her potential at school. She joined a provincial team three years later, but retired in 2011, after an injury.

In 2015, she met the man who is now her husband and her son was born a year later. But after his birth, she suffered such severe depression that she was driven to contemplate suicide, she said.

That event spurred her comeback as a professional boxer, after spending a few years in gruelling practice to regain her physique and strength, said Huang, who also works as a teacher in the coastal city of Zhejiang.

After the victory, fans and friends surrounded Huang to celebrate her medal.