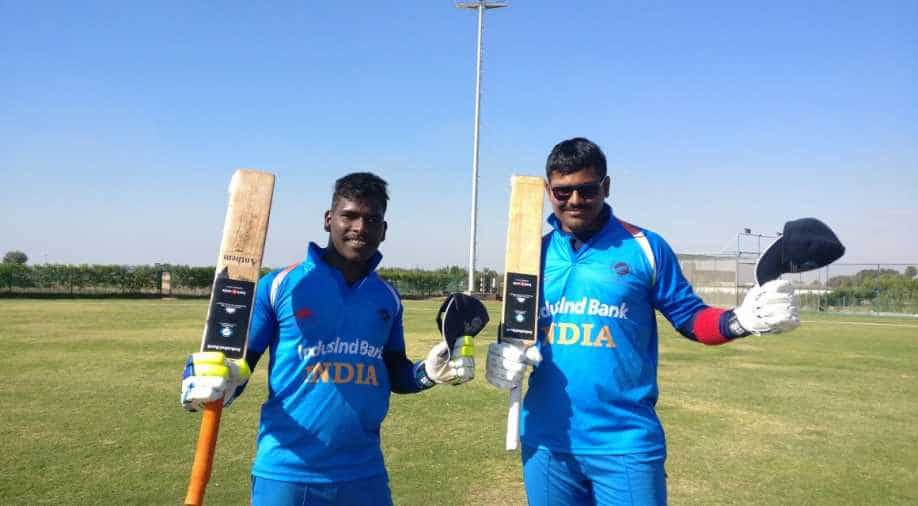 For India, both the openers slammed a century and led the team to a huge victory. Photograph:( Twitter )

The 'other men in blue' defeated Bangladesh by 10 wickets in the Blind Cricket World Cup at MCC Ground Ajman, UAE on Saturday.

Bangladesh won the toss and opted to bat first. They had set a target of 227 after one of the players Ajay took four wickets to restrict the opponents at 226.

For India, both the openers slammed a century and led the team to a huge victory with more than 20 overs to spare.

There it is!!!! A huge win for team India as they beat Bangladesh by 10 wickets with more than 20 overs to spare.#blindcricketworldcup #TheOtherMenInBlue #thecupisours #INDvsBAN

Recently, India took revenge of Champions Trophy by defeating Pakistan by 7 wickets. Pakistan scored 282 runs and in reply to that, India comfortably achieved the target in just 34.5 overs.

Depak Malik scored 79 runs, helping his team to win the match against Pakistan. He was also awarded the player of the match for his stellar performance.

Earlier, India had defeated Sri Lanka also in a high scoring match. There also, Depak Malik outshined and made 179 runs off 103 balls.

India's first match in this tournament against Australia was cancelled due to the wet outfield.