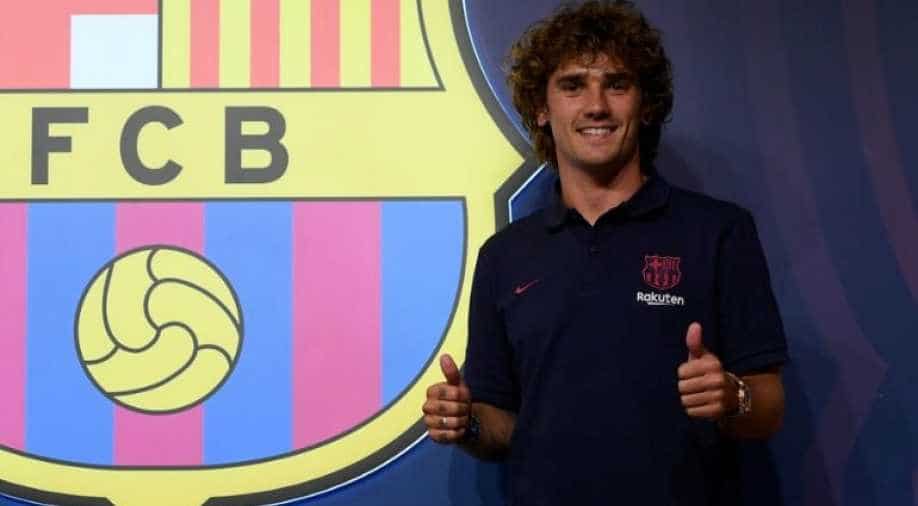 Barca revealed they had paid the €120 million to activate Griezmann's release clause, adding he would sign a five-year deal that included a 'buyout clause of €800 million'

Barcelona announced the signing of Antoine Griezmann on Friday for €120 million ($135 million), sparking a furious reaction from Atletico Madrid over the amount the La Liga champions paid for the World Cup winner.

In a statement, Barca revealed they had paid the €120 million to activate the Frenchman's release clause, adding he would sign a five-year deal that included a "buyout clause of €800 million".

Griezmann almost signed for Barca 12 months ago, but instead opted to remain at Atletico, announcing his choice to stay in a documentary called "The Decision".

"When I was a boy, my dad taught me that trains don't come around just once," Griezmann said in a video posted on the Barcelona website on Friday.

"Now it's time to take on the challenge of a new destination.

"Finally, our paths cross. I'll defend the Barca colours with all my determination and commitment. It's our time. This is our path."

However, within minutes of Barcelona's announcement, Atletico said they believed "the amount paid is insufficient to meet the release clause as it is obvious that the agreement between the player and Barcelona had been concluded before the release clause dropped from €200 million to €120 million" at the start of the month.

They said Griezmann had gone to the headquarters of Spanish Football League (LFP) to "unilaterally" break his contract after Barca met the release clause, and added they had already "begun appropriate procedures" to defend their "rights and legitimate interests".

The announcement was the latest episode in a spat between the two clubs and Griezmann after the 28-year-old failed to show up for Atletico's pre-season gathering on Sunday following his announcement in May he would be leaving for an unnamed destination -- long-suspected to be Barcelona.

Atletico then claimed Griezmann had told the club he had struck a deal with Barcelona in March, just days before the second leg of their Champions League last-16 tie with Juventus, which saw them dumped out by a Cristiano Ronaldo hat-trick after winning the first leg 2-0 in Madrid.

He won the Golden Boot at Euro 2016 when France were beaten in the final on home soil by Portugal before helping to guide his country to World Cup glory in Russia last year.

The sale of Griezmann comes after Atletico stumped up a whopping €126 million to sign rising star Joao Felix from Benfica last week, making the 19-year-old one of the five most expensive players in history.

The fee was a record paid by the capital city club and the highest ever received by a Portuguese outfit, and the sale of Griezmann helps finance such a huge transfer for a young player.

Felix burst onto the scene last season, scoring 20 times and making 11 assists in all competitions for Benfica as they won the Primeira Liga and reached the quarter-finals of the Europa League.