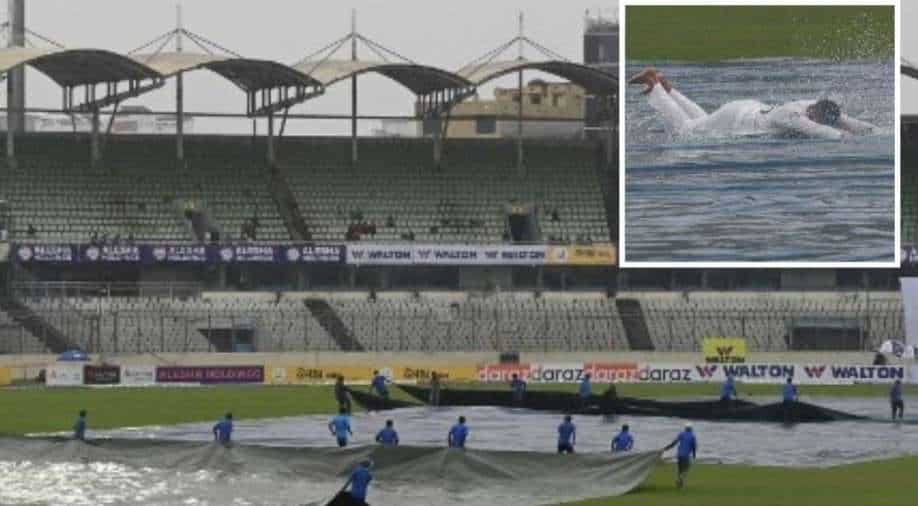 Shakib Al Hasan slides on the plastic sheet covering the pitch after the play was called off due to rains Photograph:( AFP )

Meanwhile, Shakib has sought to withdraw his name from the squad for next month's Test series in New Zealand, selectors said

Bangladeshi all-rounder Shakib Al Hasan channelled his inner child as he was spotted enjoying skidding on wet covers during the second Test match between Bangladesh and Pakistan at the Shere Bangla National Stadium in Dhaka.

The sweet video, which has gone viral on the social media forums, is winning hearts as the cricketer showcased his fun side and enjoyed the rain after it interrupted the second Test in Dhaka on Sunday (December 5) with only 6.2 overs played.

The tourists extended their lead as the play did not get underway until after lunch with Pakistan reaching 188-2, adding 27 from their first day total. The match didn't have any entertainment to offer but Shakib had plenty.

Ali was batting on 52, alongside skipper Babar Azam, who added 11 runs, including a boundary off the first ball of the day, to stay unbeaten on 71. Pakistan lead the two-match series 1-0 after winning the first Test in Chittagong by eight wickets.

Meanwhile, Shakib has sought to withdraw his name from the squad for next month's Test series in New Zealand, selectors said on Sunday. Bangladesh are set to play two Tests against New Zealand in January, earlier included Shakib's name in the squad for the series.

"He gave a letter to the chief executive officer seeking leave. We are yet to be informed if his application has been granted or not," Chief selector Minhajul Abedin said, referring to the Bangladesh Cricket Board.